Exhaust Cryptographic Cipher and spend 1 secret: Investigate. Your location gets +1 shroud for this investigation.

Exhaust Cryptographic Cipher and spend 1 secret: Investigate. Your location gets -2 shroud for this investigation. 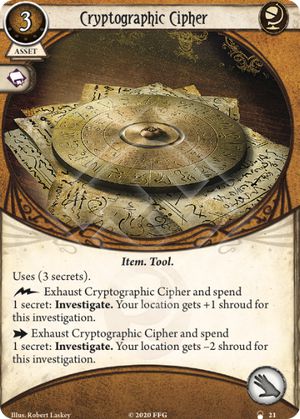 On the surface, this looks like a 50% more expensive Flashlight. Let me draw your attention to the three major differences between them:

Cryptographic Cypher lets you choose to, instead, spend a use on a investigation instead of a one, at the cost of making the shroud 1 higher.

Cryptographic Cypher exhausts after use, while Flashlight does not.

The first point is important for people with high intellect that would normally not take Flashlight, which is most Seekers. Getting 3 additional investigates that also potentially dodge attack of opportunity definitely has value, especially in solo where clues are distributed less tall and more wide (where Ursula Downs excels). It should be noted that Trish Scarborough can turn that into 3 investigates AND evades. Of course, this bares similarity to Fingerprint Kit, which is likely better compression at higher counts at +1 advantage instead of -1. But if you're able to consistently cycle through skill cards (especially Deduction) and commit high enough, the skill value shouldn't be an issue, and Seekers are the best at doing that to begin with (hello Practice Makes Perfect and Mr. "Rook").

The second point means you wont be able to reload this the same way as Fingerprint Kit or Flashlight, say by using Emergency Cache. You have to use Eldritch Sophist, or Truth from Fiction, or Astounding Revelation.

The third point is that this exhausts after use, meaning that you can't chain in one turn (unless you're "Ashcan" Pete). You'll have to spread its uses over several turns.

The odd thing about the card is that it still lets you use it functionally as a slightly slower Flashlight, which I'm not fully sure why someone who took it for the first function would ever want to use the second, or vice versa why anyone who would take it for the second wouldn't just take Flashlight instead (which these days includes lots of Survivors who now run Old Keyring anyway). I think, overall, this is mostly a true solo card, intended to conserve actions (net 2, though keep the costs in mind) and have that little bit of flexibility that might matter on a particularly difficult location that you only have yourself to rely on to clear. Again, Trish Scarborough might like both functions of the card- the former for dodging AoOs, and the latter for helping enable a "succeed by" test that Rogues often like to perform to refresh themselves.

StyxTBeuford · 12739
I think the flexibility of this card is interesting, even if it's rarely comes up. A high INT investigators might have a bad star, not drawing INT boosts. Use the second ability to still gather clues (instead of drawing cards to get more INT boosts). Other investigators may use the 2 abilities depending on shroud (#1 on shroud 1-2, #2 on 3+). — Django · 4305 10/1/20
When you use the 'reduce shroud' portion of Cryptographic Cypher, you can still perform fast actions from other cards while the shroud is lowered. So, that's one reason to use the second ability on this card. — tercicatrix · 13 10/5/20
Sure, but typically if you're building around doing that it's better to just take Flashlight. I'm not saying there aren't incidental uses of both functions, just that, if you're taking it for one, how often would you care about the other? — StyxTBeuford · 12739 10/11/20
On a 2 shroud location, use the second ability, then use Double or Nothing, and since 2*0=0, enjoy 2 testless clues. — lockque · 1 10/28/20
Not testless, as you still are vulnerable to the autofail. It's also no different than Flashlight in this regard, except more expensive and it exhausts. — StyxTBeuford · 12739 10/31/20
5

So the other review did not mention that this card combos so well with The Skeleton Key. This isn't my idea but I saw in a deck guide that Skeleton Key sets the shroud to 1 and you can use the fast action on this card and not have to add 1 to the shroud of the location.

This card feels similar to fingerprint kit though a good bit worse. It slightly accelerates your clue gathering at the expense of a hand slot and a fairly pricey asset. This makes you take more tests and increases the difficulty of one of those tests instead of making it easier. I already don't use fingerprint kit much because of the high cost, though I think it can be good especially if reloaded with Emergency Cache (3). Will be curious to see if this receives any upgraded versions because as is it's quite lackluster. I'm very unsure why the second ability even exists if not for an upgraded version to make it much better (like setting the shroud to 0).

dubcity566 · 74
Fingerprint Kit can also be Contrabanded — Zinjanthropus · 212 11/17/20
This exists because the free action combines with Trish Scarborough's ability, allowing her to evade a monster engaged with her in a free action. If you're looking at this as basically another way to increase your clue-get by 1 each turn, it's cheaper fingerprint kit (side note, there are plenty of ways to reload secrets as well as supplies). If you're getting more value out of a free investigate action, this is probably better. — SGPrometheus · 686 11/17/20
The second ability is there to ensure you can still get clues the sub optimal way if necessary. If you're suffering a debuff or something, you can use it like a flashlight and not have to slow down so hard. The first ability is amazing though! It does make the test harder, but if you succeed, that's a clue and an action you didn't have before. And as people have mentioned, it's great with Trish to get the auto evade, thereby bypassing the AoO. — LaRoix · 1607 11/17/20
First ability would also allow Alice Luxley to do a damage as a free action, which might clear the location for further investigates. — Time4Tiddy · 213 1/7/21
The second ability can also combo nicely with Lola Santiago, as you can buy another extra clue at a 2 resources discount. — jamalix · 1 10/19/22