As an additional cost to play Deep Knowledge, add 2 tokens to the chaos bag.

Investigators at your location draw a combined total of 3 cards (you decide how many cards each investigator draws). 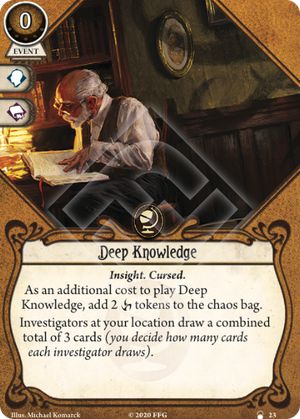 Getting three cards for an action and zero bucks is extremely powerful. It can protect you from the encounter deck in Dunwich and night of the zealot.

You’ll have to deal with the curse tokens sooner or later, which means spending experience points. Which makes total sense for a card with the keywords of both insight and cursed.

MrGoldbee · 1234
I think it's pretty bad cause you need to draw this card as well, it's more like 2 actions and 2 curses to draw 3 cards. The real value is giving the draw to people how are out of cards and/or missing key cards. — Django · 4141 10/27/20
Of course there's also the consideration of "is curses in the bag a bad thing?" Seems like there's a theme in seeker and mystic of drawing power from have curses in the bag. — NarkasisBroon · 9 10/27/20
At low XP most curses result in a failed test because you aim at the difficulties most likely modifier (+2 on standard). However with more XP you tend to have a higher modifier (XP weapons and spells have higher bonus), so curses lose relevance. They're also less relevant for survivors as they fail on purpose and can modify the result after drawing tokens. — Django · 4141 10/27/20
Solo Marie added a few Curses with Promise of Power (sometimes aided by Practice Makes Perfect) and almost never had to draw all of them. Later in the Campaign she would often pass anyway when drawing them. — Zinjanthropus · 206 11/10/20
powerfull card for insigh decks (roland parallel, joe diamond) — isuscbrmid · 32 7/21/21
1

Dude, I just realized this card is a Lord of the Rings LCG reference :O

In Lord of the Rings LCG, Deep Knowledge is a card that has every player draw 2 cards, but also has a downside in Doomed 2 keyword.