Regulation - You cannot play more than 2 cards each round.

When you play an Insight or Tactic event, exhaust this Directive: That event gains fast. 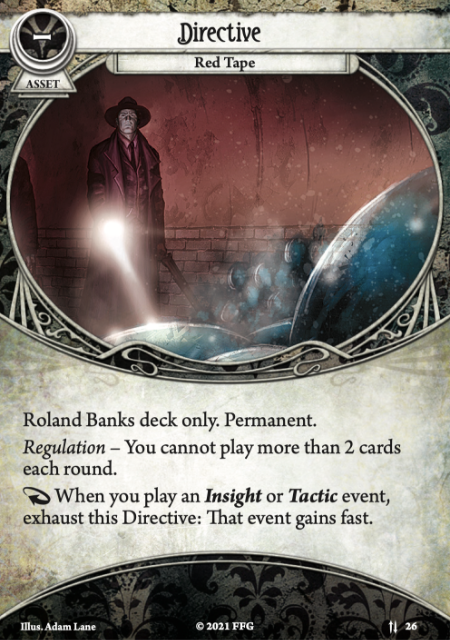 Very funny and tricky Directive card, I think. You can very strange play by triggering. Note that you may play a event during any player window as in Fence FAQ, as I know. If it's revealed that it's not true, please ignore this review at all.

However, the Regulation is strong. You can play at most 2 cards for each round. Don't forget this limit includes not only events, but also assets. If you plan to trigger , you can only play 1 card for each round. One solution is Stick to the Plan + Ever Vigilant combo. Just reveal , and play Ever Vigilant.

elkeinkrad · 399
Ever Vigilant should not work, as it also _plays_ the cards, right? — trazoM · 9 7/5/21
@trazoM you need to reveal elder_sign to ignore regulation before play Ever Vigilant :) — elkeinkrad · 399 7/5/21
aaah, that's printed in Roland, I see. I guess it was a joke, then :D — trazoM · 9 7/5/21
The ruling for fast assets is that they can be played in any fast window **during your turn**! (Corroborated by re-reading the Fence FAQ answer very carefully) So, rules as written, you would not be able to do shenanigans with this directive during the enemy phase. Obviously, "rules as written" is very different from "rules as intended" so people should play as they want :) — Frost · 238 11/22/21
Event is not asset. There are no restriction for event. — elkeinkrad · 399 12/14/21
Additionally, Fence tells "during your turn" but this Direction doesn't. — elkeinkrad · 399 12/15/21
Good point that I missed (and TIL!) in which case it works like Chuck Fergus, for which there hasn't been a ruling as to what happens when you have a fast event without a specified point in time it's allowed to be played, which leaves us with you can basically decide for yourself — Frost · 238 12/16/21
Would just like to point out that in Arkham Horror, "playing" refers to paying a card's resource cost to place it into your play area, so you can still use the Reaction of this directive (it's Permanent, so it always starts in your play area) and still play 2 more cards from your hand. Because of this, Ever Vigilant still works, but you can only play one other card. Since it gets fast, though, you can do cool things like playing weapons while an enemy is right on top of you. So it's still very strong! — GoldPooka · 3 3/17/22
4

This directive can be cheated using Bob Jenkins free action to play item assets from your hand. Since Bob's ability is a free action for himself Roland isn't playing the card. I think that's pretty neat and synchronizes pretty well between Bob and Roland.

TL;DR: Included links for list of cards, and notable cards as of 9/6/2021 based on what is on the site. Lots of interesting tricks. Stargazing is the most surprisingly good use I've seen of this.

For those who are interested in a list of non-guardian Insights and Tactics that alternate Roland Banks can take and which are not already fast, here is a search. The list that includes Guardian cards is also helpful, but is much, much larger - here is a search.

There are a lot of cards that are impractical to use - often due to Roland's base stats not fitting well. I've done my best to list out any of particular note.

There's definitely a lot here to process, so think carefully about which packages you want to include - it can be hard to balance the amount of combat and clue gathering correctly, but good use of your fast plays can sneak in a lot of extra actions and avoid tests altogether.

Just remember, if you're trying to get access to the whole suite of these cards, Roland's combat power will suffer - loss of access to the 5 XP Guardian weapons hurts a lot. It's not impossible to fight - Enchanted Blade (Guardian), Survival Knife (2), Timeworn Brand, and Enchant Weapon can make reasonable weapons, Beat Cop (2) and Guard Dog can still help deal some extra damage, Alice Luxley can help pivot towards a slight Investigation focus, and you have more events to try to squeeze out some damage through action compression. However, that choice will mean that Roland's offense tends to suffer in exchange for a few interesting tricks and some extra early XP - and if you're using Directive (Due Diligance), you will almost certainly be playing a more flexible role than a primary fighter.

(My money's still on Stargazing being the most surprisingly useful purchase, though.)

Ruduen · 825
Due to his access to tactics up to level 3 he can also use the rouges "swift reload" — Tharzax · 1 9/7/21
I explicitly excluded any cards with the word 'fast' in them in the search, since they would be cards that might be good to have, but don't have synergy with this directive in particular. Swift Reload falls under that category. It's also not included due to the lack of access to level 5 Firearms - the best you're going to see is the .45 Automatic (2) or .45 Thompson (3). — Ruduen · 825 9/7/21
I think the u — Tharzax · 1 9/8/21
I think the Thompson fits good in a build with this directive with swift reload and act of desperation you should get enough money for the fast events — Tharzax · 1 9/8/21
There's some interesting cards, especially flare and stuff that draws cards/ resources. Ro||and's back also includes Eidetic Memory so he can play some of the cards mentioned again. Though i'm not sure if he can play Eidetic Memory as a free action with the directive cause it doesnt have the right keywords until it copies another card. — Django · 4420 9/9/21
I'm not 100% sure, but I think you can speed up an Eidetic Memory card. I think the timing windows on Eidetic Memory/Directive are the same as Painted World/Chuck Fergus, and that particular combo works. — Ruduen · 825 9/9/21
Eidetic Memory is Spirit traited and cannot be taken by either version of Roland. — jemwong · 90 9/12/21