Tiziano Baracchi
For the Greater Good #192. 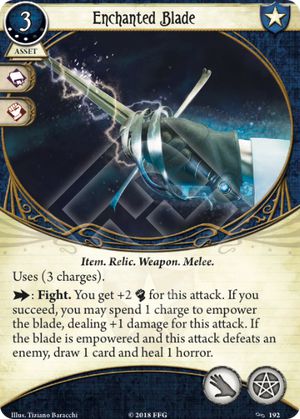 Enchanted Blade(3) is truly one-of-a-kind. Its charges are never wasted, since you would only use a charge if you succeed the test. Card drawing and horror healing off defeated enemies are amazing. Having the flexibility to deal 1 damage on demand is nice. However 3 charges are simply not enough as a primary damage source, and it is better to save the charges for finishing blows anyway. I think the blade is ok-ish on its own, but amazing if you have an alternative damage source.

Pairing the blade with other melee weapons, i.e. Machete or Timeworn Brand, serves two purposes: 1. Temporary damage source and card draw before you draw the main hand weapon, and 2. efficient horror healing afterwards. This pairing is particularly good for Mark Harrigan (and to some extent Roland Banks), who can utilize the horror healing and relatively low boost well.

Pairing the blade with a big gun serves a third purpose, which is to kill 1-2 health enemies which would otherwise waste precious ammos of the big gun. This however requires Bandolier (or its upgraded version), which together with the big gun itself, requires quite a setup. This pairing works best in a deck with good economy.

There is a pairing I found particularly interesting: With Agency Backup. Agency Backup is really good for providing stream of constant damage (and testless clues), but when it comes to monster killing it is the burst that matters. The blade compliments it really well. Tab Agency Backup once (or more with Charisma and/or Mitch Brown), then finish with the blade would be a splendid way to kill a 3-4 health enemy. The blade is also not too expensive to play alongside Agency Backup. If you ever want to try to build a deck centered around Agency Backup, Beat Cop(2) and ally-buffing cards, I believe Enchanted Blade(3) is the weapon of choice.

Side note: Don't pair the blade with Double or Nothing. The "spend 1 charge to..." phrase is part of the "if you succeed..." effect, so you still need to spend 2 charges to deal 4 damage. Also only either the first time or the second time of resolving defeats the enemy but not both, so you still only get to heal horror and draw card once.

ak45 · 71
I think this is a good option if you need to have a hand free for other items like flashlight or whatnot (this will be the case mainly in true Solo). If you are playing as the enemy killer of an investigator team though, I wouldn't recommend expending 6 XP on a side arm. — Alogon · 376 7/22/19
2

Enchanted Blade has been hailed as a decent backup weapon to Machete because its damage buff goes off under different circumstances, its relic trait splats pesky Poltergeists, and it uses an arcane slot that wasn't ever getting filled anyway. So how much better is the straight guardian version?

Rather than extra copies of Machete, it might be more apt to think of this 3 XP beatstick as a miniature Timeworn Brand. The constant +2 makes fighting easier in general, and the timing on the charge trigger is simply perfect. Ensuring that charges will not be wasted is fantastic. Then there is that horror heal & card draw rider that might actually tempt you into overkilling something just for some tempo or to help mitigate the traditional blue investigator sanity defecit.

This card also marks the first time that guardians legitimately have multiple paths to weapon upgrades, because previously the big two-handed guns outstripped melee weapons in performance at high XP totals, whereas now it would be perfectly reasonable to dual-wield this and the Brand (especially with Ever Vigilant helping setup). Big guns will still do better in bursts but melee weapons now have multiple +2 options and no ammo constraints so at last the power gap is lessened.

I really like this card in Mark Harrigan, and think that it might be a good option for Roland Banks as well. I think the card combines 3 different effects into one for a pretty cheap price. Over time the card will generally end up drawing you 3 cards and healing 3 horror for 3 resources, but on top of that it's a weapon that gives you +2 to hit and also can gain +1 damage when you need it. The downside of it having such limited charges is somewhat mitigated by the fact that at least for 3 health enemies you still take the exact same amount of attacks to kill, and with a character like Mark you already want to be running Beat Cop, Vicious Blow, and have access to The Home Front so you can make the card 1-shot 3-4 health enemies without having to exert TOO much effort. The temporary nature of the card is made up for by the fact that it draws you cards, so you can reasonably draw into another weapon with that. And the Sanity heal is wonderful, Mark and Roland are both investigators that you're always worried about taking Horror, but most of the horror healing cards in the game are pretty slow and aren't very good, meaning you had to choose between playing weak reactive cards or put yourself at great risk of getting defeated by Horror. With this card you can get some crucial horror healing while not having to divert yourself from your main gameplan. It might be a bit bad to spend 3 XP on a weapon that isn't really going to be your primary option into late-game, but it's a solid rolefiller that I think is worth the XP cost, especially if you have a bit to spend.