Exhaust Tennessee Sour Mash and spend 1 supply: You get +2 for a skill test on a treachery card.

Discard Tennessee Sour Mash: Fight. You get +3 for this attack. If this attack succeeds against a non-Elite enemy, automatically evade it.

Greg Bobrowski
For the Greater Good #191. 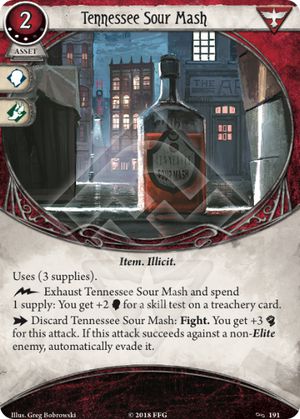 The survivor version of this upgrade is clearly worse than the rogue version. Fast is better than -1 cost. +3 willpower twice is definitely better than +2 willpower three times. And evasion that is limited to non-elites is a quite large limitation, and causing a point of damage when you evade is only useful some of the time, and you have to wait until you have made three, rather than two, separate willpower skill checks before it is efficient to use this power; whereas the +1 damage of the rogue version is actually quite helpful and useful. I’d much rather take the rogue upgrade than this one, and since the basic version of this card is terrible, I wouldn't take the rogue upgrade either because it still isn't good enough.

The designers may have made the survivor version of the card weaker because they knew survivors had access to cards like Scavenging which only work on Items, and are always looking for good new Items. But they needn't have worried, this card is plenty unimpressive even if you do have Scavenging.

You need this card only you're playing with a campaign with high Will test.

However, survivor can use Cherished Keepsake, the cheapest horror soak or Nothing Left to Lose to prepare for incoming treachery with 5 Card and 5 Resource

"Ashcan" Pete can play Moonstone with the same price.

It's hard to squeeze this card for the full-potential because you need to play it before the treachery appeared. Then wait for 3 another treachery card.

AquaDrehz · 179
Yeah, I'm not really sure who wants Survivor Sour Mash. I can sort of see Rogue Sour Mash, as that gives +3, is fast, and is in the faction with the lowest willpower, but even that one hasn't made the cut for me, yet. It's a shame, as I like the card a lot thematically. — Zinjanthropus · 208 8/2/20
Yorick maybe? I know the Teddy Bear is a thing, but boosting Willpower for 3 tests seems better than OK and may help mitigate the other bad things that Will test Treacheries can do besides deal horror. The +3 Fight action + auto evade seems pretty useful to either finish off an enemy with an odd amount of health or evade a non-hunter enemy and leave them behind. At 2 cost it is relatively cheap for Billy to replay as well. IDK, seems like a cool option. — Blitzer81 · 2 9/17/20