Exhaust Tennessee Sour Mash and spend 1 supply: You get +3 for a skill test on a treachery card.

Discard Tennessee Sour Mash: Fight. You get +3 and deal +1 damage for this attack.

Greg Bobrowski
For the Greater Good #190. 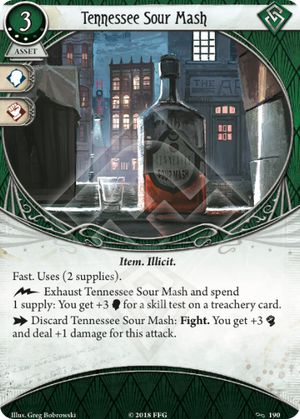 I don't know how good this will turn out to be, but I wanted to point out that the art changes from the original on these upgraded cards; apparently 3 XP buys you a little shot glass ( survivors just get more whiskey).

The main changes here are the addition of the fast trait, an extra +1 on the defensive buff, making your molotov cocktail attack deal +1 damage, and the card has a icon in case you're in to pitching your XP cards for checks.

I can see an argument for Jenny Barnes taking this at some point because miss moneybags plays it easily, hits 6s on her stats, and it represents a nice slot-free attack that leaves her hands free for her guns or Lockpicks or wotnot.

I tried Tennessee Sour Mash in Finn Edwards and have been mostly unimpressed, although it is another illicit card to search out or recur with Smuggled Goods. The small changes here just don't feel worthy of 3 XP that could be better spent on a Lola Santiago or something.

This might actually be my favorite card thematically. I love the idea of an investigator seeing something horrifying like some Rotting Remains and just deciding "nope" and taking a swig of alcohol. And you can bust the bottle over the head of an enemy too, which is hilarious.

Tennessee Sour Mash has quickly become one of my earlier upgrades for solo Skids who has trouble with willpower treacheries. This gives him enough of a boost to either pass those scary tests or at the very least lessen the damage they do. Two uses tends to be enough unless he is particularly unlucky with encounter deck cards. The attack is also solid, granting him +3 fight and +1 damage. Combine it with Vicious Blow and suddenly you have an incredibly versatile card that is useful in a variety of situations. The upgraded version being fast is especially critical when playing solo where every action counts.

DelightfulDilettante · 175
This upgrade is also much better than both the original card and the Survivor version. Fast really helps Rogues run this without losing tempo, and the Willpower boost and meaningful fight action arguably save you more actions down the line. — StyxTBeuford · 12473 9/27/19
Yorick Take a shot for each Rotting Remain and we succcess on both incident ! — AquaDrehz · 164 5/18/20
I didn't even see that the L3 Rogue version was Fast. I thought it was better than the Survivor version before knowing that. Skids will get the upgrade eventually to go along with Pickpocketing, LCC, Lockpicks and Liquid Courage as he remains connected to his earlier criminal days. — TWWaterfalls · 735 11/10/20
2

I think this card is a good upgrade to the base card, the improvements it gives are well worth the extra experience points. Especially how the attack gives +1 damage, making it a proper and effective attack. However, the base card is spectacularly overpriced, so it is still a struggle to like this card.

The big virtue of this card is that, unlike the base card, if I found it in my hand I would consider it worth the cost of playing it. I think that if you are committed to making an alcohol-based deck, this card would be perfectly suitable, as long as you aren't worried about spending your XP efficiently. But in terms of the real value of the card, considering the high resource cost and the awkward ordering problem (in order to use the powers efficiently you have to use the two willpower boosts first and only then use the attack), I think it would be overpriced with an XP cost of 2, much less 3. You need a really good combo in mind before this becomes a solid way to spend your XP.

ChristopherA · 75
The key in this upgrade for me is that it's fast. The action cost on the og Sour Mash is just not worth the weird payoffs. Here it's a flexible utility card that comes without hurting your tempo. — StyxTBeuford · 12473 5/30/21
A Finn Deck with scavenger, fence and other illicit stuff should work with this card — Tharzax · 1 5/31/21
I've found both the basic and Xp versions somewhat useful in 2-3 willpower Rogues in scenarios with a lot of willpower treacheries (hello, TCU). I've had some luck with it in a Tony runthrough of waking TDE, for example. It's not a first upgrade by any means, but it's not worthless. — LivefromBenefitSt · 676 6/3/21