Exhaust Tennessee Sour Mash and spend 1 supply: You get +2 for a skill test on a treachery card.

Discard Tennessee Sour Mash: Fight. You get +3 for this attack. 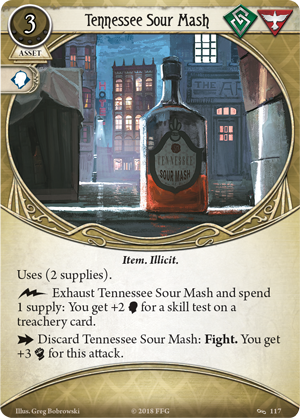 Having not played this yet, let's do some theorizing: Who wants this card? Our first guess might be low Will Survivors and Rogues, such as Finn, Skids, Preston, or Calvin. While this may help them pass a Will test (especially so on Easy where the chaos bag is more mild), +2 Will doesn't raise their Will high enough that this will really change a failure to a reliable success. In short, you can use a supply from the card and still be highly likely to fail.

I think the characters who most benefit from the Will boost are characters who have 3 (or more) Will already. This effectively adds a Guts to a Will skill check. A lot of Will tests are against a threshold of 3, which means that if you have a Will of 3 already, Tennessee Sour Mash puts you 2 over the threshold to begin with, which is usually a safe test on Standard. If your Will is higher than 3, then you are even more safe to test with this card.

Once your supplies are gone, you may want to use this for the Fight bonus and maybe take out a small fry enemy. This is honestly the least beneficial part of this card, but at least it allows you to gain some value after this thing is empty (cough, cough, Mystic spell assets, cough, cough).

A lot of characters can take this card, but I think a few people actually like it. Let's review some interesting candidates. But first I want to add that we can eliminate all the people who get their out of class slots wrecked by dual class card rules, i.e., Zoey, Rex, and Jim:

-Agnes can test at 7 Will with this card. You might think, "why do I care about Agnes passing Will tests on treacheries? She's 2 up on tests against a 3 naturally." Don't underestimate this! Agnes regularly stacks horror on herself to activate her passive, deal with her Weakness, or (and this is the big one) use Arcane Research. Being able to all but guaranteed pass a Rotting Remains or similar test on a treachery is important. Plus, since she can deal 1 damage with her horror ability, the Fight on the bottle can help her take down a 2 health enemy in 1 test.

-Leo can test 6 on Will tests with this and refill it with Venturer. This combo makes him very hardy against treacheries and can help protect his low sanity pool.

-Yorick can ALSO use Venturer on this card, but not just that - he can put it back into play after using defeating an enemy. Which means, he can recur this card using its own Fight action.

-Finally, Rita can, just like Agnes, use the 1 damage from the bottle Fight action to take out a 2 health enemy if she combines it with an evasion. Rita also has a 5 sanity pool, so passing treacheries is big for her.

Those are my initial picks for this card: Agnes, Leo, Yorick, Rita. It will be interesting to see who the community ends up deciding actually uses this card once it is finally released.

Wow, they really went out of their way to make this card overpriced.

The basic purpose of this card is to boost will tests. In my opinion, if there were such a thing as a skill card which just boosts a will test and nothing else, it should give a + 3 bonus to be competitive with Guts. This card gives a + 2 bonus twice, so at least the bonus you get is better than the value of a single card in your hand. But once you factor in that you have to spend an action to play it, I think this card would be overpriced for the value of the will tests if it costs 0 resources, much less 3. The difference would have to be made up by the value of the combat ability. But I think the value of that is really very marginal. First of all, a combat test which does not give bonus damage is rather specialized, occasionally it will be useful but mostly it is not something you want to do. But the real hidden problem is the ordering problem, not only do you have to wait for just the right situation to come up where you need that kind of combat bonus, it also might come up before you have used the will bonuses, forcing you to sacrifice one or more of the will bonuses if you want to use the combat bonus. If you don't want to waste the will bonuses, you may have to wait for a really long time before you can use the fight bonus. This all comes together to make the card really quite marginal. If the card had a resource cost of 1, I would consider it to be not that amazing but at least interesting to try in appropriate decks. But a resource cost of 3 is just insane.

Now, the above analysis discounts the fact that this is an Item, and thus can be used as part of a combo with other cards that only work on Items. However, you had better have a pretty great combo for this to work. Merely having a deck that plays Scavenging is not enough of a combo, the degree to which this card is overpriced is just too great. Maybe a William Yorick deck could somehow put together a good enough combo for this, but I can't think of one.

ChristopherA · 95
wait it exhausts! you can't even play it to get +4 versus frozen in fear, why wouldn't you just run guts!!!! (I think if the level 0 version did +1 damage I could see a place for it) — Zerogrim · 255 5/27/21
Such a shame that this card is overbalanced. It's got amazing flavor and could have been something special. — Soul_Turtle · 88 5/27/21
EDITED: I had originally suggestion maybe Act of Desperation could somehow save this card, forgot it can't be used on items that don't take up hand slots. — ChristopherA · 95 5/30/21