Agency Backup may be assigned damage and/or horror dealt to other investigators at your location.

Exhaust Agency Backup and deal 1 horror to it: Discover 1 clue at your location.

Kyri Koniotou
In the Clutches of Chaos #274. 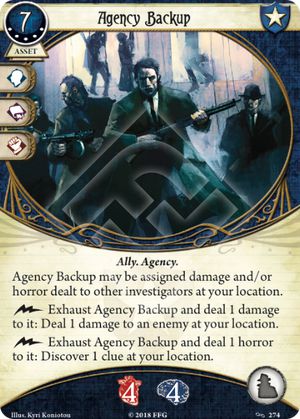 Obviously not showing up early in a campaign, and likely not among your first upgrades.

I roleplay Leo as a cross between Zap Brannigan & L. Ron Hubbard given his employment practices, so I like to think the feds aren't so much showing up as "backup" but rather because they'd "like to ask him a few questions."

At five XP and seven resources, you absolutely have to build your deck around agency backup. It’s not incidental, it should be critical.

Thematically, this card is Roland Banks pulling out all the stops. No more skulking: it’s time to meet force with force. It can give him clues or some sanity soak, and with Hallowed Mirror he can keep it going even longer.

Zoey would have to pick up some rogue economy cards to afford this.

But this is the card Tommy players salivate over. Calling in Favors to make it happen, then using them up to get cash back. (The last damage/horror can even come from someone else at your location, giving you eight resources, three damage and three clues per use.)

Pair this with the The Star • XVII for truly ludicrous results.