Regulation - You cannot move more than twice each round. 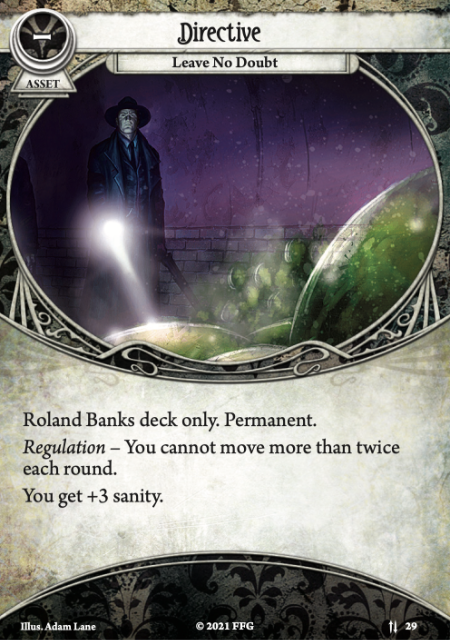 Does this only count the basic move action, or all card effects with a "Move" effect?

For example, how does this interact with fast actions such as Shortcut? I guess that if Roland is targeted with this card, it would fail if he has already moved twice?

The other query is for vehicle assets (such as those in Innsmouth); Do they count towards the 2 move limit, and if so, what happens if a car or boat wants to leave and Roland is on board?

I assumed originally that all instances of the word "move" on a card are included, but then considered scenario effects when locations are removed from the game and investigators are "moved" to a new location by this effect, and realised that there must be at least "some" exceptions. Where are people drawing the line with this?

joguitarist · 1
I can answer some of these questions. It does include all effects that move you, so shortcut for example would indeed fail to take effect if targeting Roland. As for being moved off of a location because it is leaving the game the faq features a new section which essentially says "if something is about to mean you are at no location, ignore that effect" so if your location is about to disappear from the game, you move from it even if you have this directive. As for vehicle assets, I don't have a good answer for that. I'd have to look again at the vehicle rules in the scenario to be sure. — NarkasisBroon · 10 7/3/21
I'm not sure but that vehicle cannot be moved due to Roland? Here are two rules with cannot: "While an investigator is in a vehicle, that investigator cannot move independently of the vehicle.", " — elkeinkrad · 410 7/5/21
(sorry to splited) "You cannot move". Thus, Roland cannot be moved, and vehicle cannot be moved with Roland. That's my oppinion. — elkeinkrad · 410 7/5/21
Related to this, would Scout Ahead count as one or three moves? It is one movement action to move 3 times. — dkilkay · 1 1/16/23
0

An important question that came up while playing. If Roland takes 5 mental trauma while playing this directive, does he go insane? Or does this functionally give him health and San of 9/8? If he breaks this directive with 5+ horror on him, is he immediately defeated due to horror?

Hydra · 6
The glossary entry for Trauma says you're driven insane if you have mental trauma equal to your *printed* sanity. Also, yes, you are (indeed, any card with a sanity value is) defeated whenever you have horror tokens on you equal to your sanity, whether that was because of placing more horror tokens or your sanity value being reduced. — Thatwasademo · 44 4/25/22
I'm not quite so sure. For one thing, that definition preceded the Directives by a considerable amount, and likely did not take into consideration that an investigator's health or sanity could be increased. Directives are Permanents, and the rules say: "A card with the permanent keyword starts each game in play," so there is no point when the Sanity boost from the Directive is not active, so Roland's Sanity is 8, since there is no way to get rid of a Permanent. It's a weird super-edge case, so I'd hate to claim I knew definitively which way the FFG staff would decide. — LivefromBenefitSt · 937 4/25/22
Doesn't matter that the definition preceded the Directives. Printed sanity means printed sanity. It's called future proofing. And besides, if you allowed ruling by your interpretation, cards such as St. Hubert Key and Curse of Yig which lower your health/sanity during game play would be able to kill you if they lowered your health/sanity to the level of your trauma - even if you had healed before playing them. — Death by Chocolate · 1258 4/25/22
Well, it matters that this unique edge case wasn't even a glimmer in the developer's eyes when it was written, and cards overwrite definitions. Your examples don't really compare; if an investigator with, say, 7 Sanity and 5 mental trauma played St. Hubert's Key, the check to see if they were defeated would happen before the assigning of trauma, and SHK would discard immediately. SHK is also not a Permanent card. As for Curse of Yig (also not a Permanent) , if Roland had 4 mental trauma and drew CoY, he would be defeated, get an additional mental trauma, and leave the campaign. Anyway, I have no idea of what the developers would rule on this, so I guess the best course of action would be to ask them. — LivefromBenefitSt · 937 4/25/22
@LivefromBenefitSt You misunderstand. Assume that the investigator had healed before getting the reduction. They would not be defeated because they would not have horror equal to sanity; they would go insane because they have trauma equal to sanity. Given the lack of developer insight, the best course of action is to follow the very clear and unambiguous rules on this. Printed means printed. — Death by Chocolate · 1258 4/26/22
To close the circle on this one, FFG says: "For “Leave No Doubt”, keep in mind that if an investigator has mental trauma equal to their printed sanity, the investigator is driven insane (and eliminated from the campaign). While Roland Banks would have 3 additional sanity from “Leave No Doubt” during a scenario, and could suffer additional horror during that scenario, he could still only have up to 5 mental trauma before being defeated." Death by Chocolate was 100% right. — LivefromBenefitSt · 937 5/19/22
I don't understand the point of+3 sanity then. I feel like something is being missed — PrecariousSleuth · 15 1/21/23
@PrecariousSleuth The point of +3 sanity is that Roland has 8 sanity to play with during the scenario - making him less likely to be defeated due to horror. — Time4Tiddy · 213 1/22/23