Regulation - You cannot fight more than twice each round.

During a skill test while investigating, evading, or parleying, exhaust Directive: You get +2 skill value for this test for each enemy engaged with you. 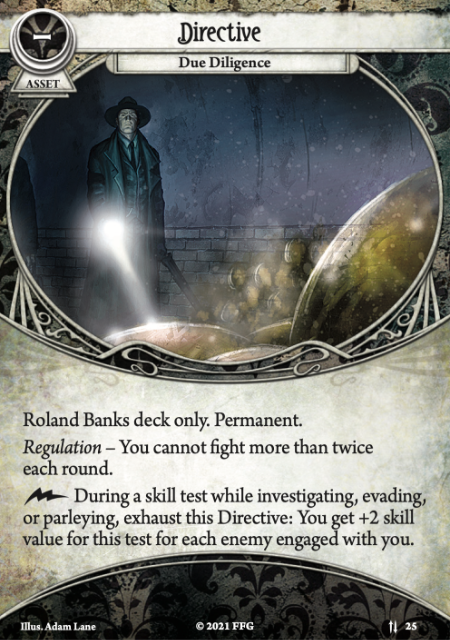 Just a small observation from putting together a deck for Roland using this Directive: the restriction that you cannot fight more than twice per round doesn't prevent Roland from using other actions that deal damage.

So feel free to use Dynamite Blast. Or pull out your Kukri and after hitting with a fight action, spend another action to do one more damage. Not the most efficient compared to a .45 Automatic, however if Roland is going to be stuck with an enemy he could rack up three damage in one turn for his three actions and not waste any ammo.

If you using the parallel back for Roland, go ahead and use your +2 bonus to first evade, then play a Sneak Attack to deal damage (and have it be free if you are paired with the correct directive).