Engage. Choose an enemy up to 2 locations away. Move (one location at a time) to that enemy's location, engage it, and add tokens to the chaos bag equal to that enemy's horror value.

Lita narrowed her eyes and tightened her grip. They wouldn't get away. Not this time. Not ever again.
Alexandr Elichev
In Too Deep #109. 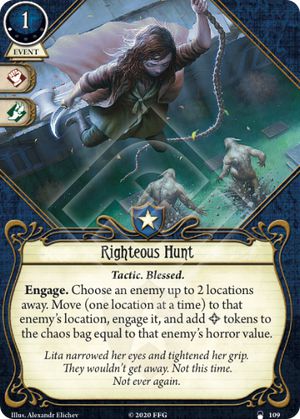 Fantasy Flight Games finally seem committed to giving each class its own flavor of movement action economy - gone are the days of Shortcut being a card for other factions to envy. Guardian movement cards are so far largely themed around protecting teammates and moving to engage enemies, and Righteous Hunt fits in right next to both "Get over here!" (0) and (2). All three of these cards allow you to engage a nearby enemy and can often save you actions doing so, typically by crossing a location gap, and they span levels zero to two. Righteous Hunt being half the experience and resource cost of "Get over here!" (2) is noteable should you realise halfway through a campaign that you want to squeeze an effect like this into your deck for cheap, but looking more closely at each card will help us determine when Righteous Hunt will shine.

Righteous Hunt moves you, while both "Get over here!"s move the chosen enemy. Which of these effects is better will vary a lot. If an enemy is between you and your objective, then moving toward it is better. If you are already at your objective and a distant enemy is threatening you, moving it to you is better. The latter is common when cultists such as Acolytes show up, but sometimes you may also be able to spawn those enemies such that moving toward them is moving toward your objective. I think the "Get over here!"s have the edge in this regard, but The Midnight Masks and The Unspeakable Oath occur to me as noteworthy scenarios where enemies are likely to spawn at or between you and your objective.

Righteous Hunt works against Elite enemies and can grant you some Bless tokens. Neither "Get over here!" can choose an Elite enemy, but both grant you a Fight. Which of these bonuses is better will again vary a lot. An extra fight is fantastic because you were probably going to do that with an enemy you wanted to engage anyway and it can round out the damage from your weapon to save actions and precious ammunition. Bless tokens will be great if your deck rewards you for playing them, but otherwise this is fairly weak. Righteous Hunt's best advantage here is allowing you to close the gap between you and an Elite enemy.

Okay, with that out the way, assuming we do want an efficient way to engage enemies, which of these cards is better? I think that both "Get over here!"s are some of the most straightforwardly powerful cards that enable engaging, potentially saving you both move and fight actions, and in the level two version's case, allowing for some finnicky timing tricks, such as moving enemies during other players turns and the Mythos and Enemy phases. If you're playing Nathaniel Cho, it is easy choice between "Get over here!" and Righteous Hunt because the former actually deals damage, and you can exploit the fast nature of "Get over here!" (2) even more with an extra trigger of your reaction. Additionally, "Get over here!" is Spirit traited, meaning you can find it with your Boxing Gloves.

Where does this leave Righteous Hunt? Who is this card particularly good for? I think to justify spending the experience on Righteous Hunt rather than being satisfied with "Get over here!" (0), you have to really want at least one of the following: the Bless tokens, to move your investigator rather than the enemy you engage, or to be able to target Elite enemies. The problem with wanting the Bless tokens is that you need an enemy with a high horror value to target, and enemies that deal no horror will grant you no Bless tokens, so this is not particularly reliable. I think one key to really using this card well will be setting up situations where the moves it grants you are particularly valuable. You really want to move toward your objective rather than away from it, such as toward some Elite enemy you need to kill to progress rather than toward a remote cultist that you'd be better off bringing to you.

One plausible use for Righteous Hunt is in an evasion-focused investigator. If your intentions with closing the distance between you and an enemy are to then evade it, the extra fight granted by "Get over here!" is likely superfluous. In this case, extra Bless tokens and the ability to target Elite enemies might take the edge. However, the problem with this is that, if you spend the action on Righteous Hunt to move and engage an enemy, and then another action to evade, you have only a single action in your turn remaining to take advantage of the fact you've exhausted the enemy. If you want to investigate at your location or complete some other objective using an action, the evaded enemy will ready and engage you again in the enemy phase. Moving through the location is slightly more promising, as you can evade and move off, which really drives home how good Righteous Hunt is if the enemy in question is between you and your objective at the start of your turn. On top of all that though, there are scant few investigators with access to Guardian cards that are evasion focused, with "Skids" O'Toole being the only particularly plausible example.

So far so narrow, but one silver lining for Righteous Hunt is its Blessed trait, which puts it in the cardpool of Father Mateo. For Mateo's narrower card pool, this card is pretty good, and I might even go so far as to say it's the best single card movement trick available to the priest. Open Gate is certainly powerfull too and has great potential, but it'll take up more than one slot in your deck to be effective, and you have to draw and play multiple copies. You may even wish to play both, although as far as I can tell, Righteous Hunt's " up to 2 locations away" "range" will not benefit from any Open Gates in play due to the wording. Low combat Mystics in general may be the most plausible candidates for Righteous Hunt because they may want to engage a far away enemy to fight it with one of their various spells but wouldn't benefit from "Get over here!"'s free fight action due to a low base stat. As of writing this could include Diana Stanley, Sister Mary, and the novella-exclusive Gloria Goldberg, all of whom are liable to fail a combat test without further assistance. This may also go for the 4 combat Guardians if you aren't including static boosters such as Beat Cop, and particularly on harder difficulties, so if you often fail your "Get over here!" skill test, you could definitely do worse than try this card.

Trinity_ · 165
TONY BAYBEEEEEEEE — ironbrw · 9 11/18/20
TELL YOUR QUARRY TO FUCK OFF AND GRAB BLESSED TOKENS AS WELL, MAKE YOUR TEAM TEMPORARILY FORGET THAT YOU LAID THE CHAOS BAG FULL OF CURSE TOKENS JUST TWO SECONDS AGO — ironbrw · 9 11/18/20
Or Zoey. Could do fun stuff on the Essex Express... — MrGoldbee · 1029 11/24/20
This card also allows you to pick up unengaged non aloof ready enemies at the location in between you and your target without OA, as only the action when you play it as "engage" provokes. However it does provoke if you're engaged when you play it. — crayne · 3 11/24/20
I think the fact, that it can target an elite enemy might give it an edge over "Get Over Here" in Carcosa. "The Man" is also aloof and spawns farthest from everybody, so this reliably should save 2 actions. — Susumu · 120 1/3/21
This also works with the riot whistle to make it essentially fast, pretty good if running both. — Fishfreeek · 2 1/5/21
Sure, but "Get Over Here" (0) does so, too. Only in the level 2 version, the whistle is wasted, because it's fast anyway. — Susumu · 120 1/5/21
4

There’s one character out now who is a faith-based hunter, canonically. Her name is Zoey Samaras, and she gains a resource when she engages an enemy.

When her signature item is out, this card becomes “spend an action, and kill an aloof one health enemy, up to two locations away regardless of its fight score or the contents of the chaos bag, then make the chaos bag better.” If you have a guard dog, even more automatic damage as possible.

For Tony Morgan, this is the difference between killing your weakness enemy and losing a turn for your team. Because that enemy comes into play with a bounty, you automatically get a chance to fight it, even if this would normally be your last action of the turn.

A more esoteric combo is to use this when you draw stargazing, and go mano y mano. Diana can pull this trick by herself, as can Sister Mary.

An additional edge case is in the forgotten age, where lead investigator defaults to Ursula if Monterey Jack or Leo Anderson aren’t in play. Ursula loves to move, which can be frustrating if you’re the guardian tasked to keep her alive. No more! Rush to her side, knowing that the enemy that spawns in most scenarios has two horror.

And because the card describes Lita Chantler, consider this: you could use it in any scenario where she’s in play to give your allies a to hit and damage bonus by moving to their square. Righteous!

Alright for real this time.

I haven't seen this mentioned yet, so I just wanted to add it for posterity. This card is Tactic traited. You can stick this on a Stick to the Plan and have an on-demand dash at any time during a scenario. I can't wait to try it out!