Play only if you are not engaged with an enemy.

Move. Choose an unrevealed location. Move (one location at a time) along the shortest path toward that location, until you enter that location. End this effect if you reveal a location, if an enemy engages you, or if your movement is blocked. 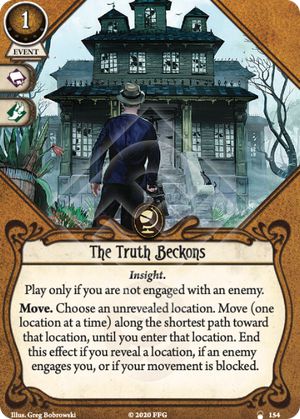 Edit: I completely forgot the "unrevealed" condition. That really ruined the intent I wrote here for this card. It just becomes incredibly niche and I don't think it can get out of Shortcut's shadow.

Big Iron · 174
In the Doom of Eztli, you're unlikely to get a decent mileage out of this card to backtrack. Odds are there will be a pissed off Harbinger of Valusia on patrol. — Vathar · 1 11/24/20
So evade it, or just drag it once to the exit and resign. It's not that big of a deal. — Big Iron · 174 11/25/20
Limited to "unrevealed location" makes it bad for backtracking. If your guardian has safeguard 2, they get to move along. — Django · 3365 12/5/20
Indeed, at least two of the scenarios listed in this review (maybe more, I haven't played everything) have all locations revealed from the start, making The Truth Beckons worthless except for its icons. — Tamsk · 1 12/10/20
For the Innsmouth Conspiracy, this card can outshine Shortcut quite well with the size of the maps we've seen. However in many other scenarios it's affect is simply negated, whether that be from every location starting as revealed, or any explore scenario in TFA. There is at least a nice interaction with Trish and her special card, or with Ethereal Form to let you move to wherever it is you need to go to escape. — the1armedbandit · 1 12/11/20
Bandit is right. If Trish played her special card, she could move all the way across Innsmouth from the very first square, assuming no barriers blocked her way. So it’s functionally a teleport in some scenarios, except to unexplored squares. — MrGoldbee · 1006 12/15/20
0

should have read the card more carefully :(

11zxcvb11 · 3
How are you revealing multiple locations with this card? The effect explicitly ends when you reveal any location. — PowLee · 9 12/14/20
Also tricky for Luke because it specifically says you can only play it while you're not engaged with an enemy, so you can't play it from a location with an enemy based on how Luke's ability works. This is still a really nice card. It's another good insight for Joe, probably better compression than Shortcut in low player counts (though still less versatile and not fast). It's not a reveal tool though, it specifically can only reveal one location. There's also quite a few scenarios where you want to dart across the map quickly, where tech like I'm Outta Here or Track Shoes become really valuable, and this card doesn't help you in the same way in those situations since often you will have an enemy between you and the exit. But again, if you're Joe, that might work fine as you could just blast them to smitheroons. — StyxTBeuford · 12385 12/14/20
Makes a nice combo with Ethereal Form as you can ghost-zip past enemies — EnglishLord · 1 12/17/20