Fast. Play when the "draw encounter cards" step of the mythos phase would begin.

Instead of resolving that step, look at the top X cards of the encounter deck, where X is the number of investigators. Deal those cards among the investigators as you wish, dealing no more than 1 card to each investigator other than yourself. Then, one at a time, each investigator draws the card(s) dealt to them.

Matt Bradbury
The Search for Kadath #110. 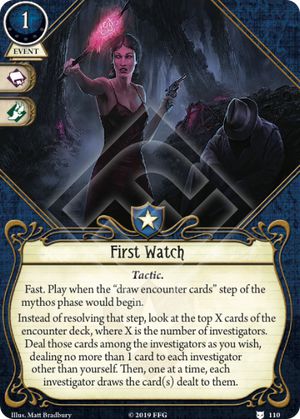 Getting the obvious out of the way; solid card in multiplayer, useless in single-player, cheap event that you'll always be able to play and rarely have a reason not to.

Now, with that said, I wish to talk about one very specific situation involving this card; the event you decide "screw it!" and subject yourself to four encounter cards in one phase. This will be a highlight of any game session, and I recommend trying it just for that reason, even if you perish in a hilarious fashion by your own hubris. In the spirit of trying to survive this self-imposed nightmare, here are three investigators who are most likely to pull it off:

High ? Check. Benefits from drawing enemies? Check. Needs few cards to come online? Check. Zoey ties with Leo Anderson for highest among the Guardians, but Leo needs a few more cards out before he's ready to endure the encounter deck, and his 1 makes him slightly more vulnerable to the second most common skill test printed on encounter cards.

Most if not all Dianas will be running encouter hate, meaning that the're often disappointed when they couldn't cancel an effect because someone else drew it. No more! With the highest potential base and decent , she will be able to handle most tests that come here way. Her balanced health/sanity thresholds and access to guardian cards top off her status as most likely mystic to handle an encounter tsunami.

Jenny might seem like a dubious choice to take on the mythos, but several rogue cards exist that help to this effect. Her decent and stats can be bolstered with Well Connected, or replaced with Money Talks, two cards that Jennys are already inclined to take. Tennessee Sour Mash helps both with checks AND enemies, Cunning with checks, and Jenny's Twin .45s with enemies too.

Lucaxiom · 2930
Nice card, but it feels like it could use some reworking; namely, for it to require the player to secretly look at the incoming mythos cards and distribute them, without consulting other players. For a zero level card that costs 1, it feels a bit too powerful and boggy. — Krysmopompas · 235 2/24/20
7

In the mythos phases where this is good, I foresee it being amazing. Sometimes you'll get three draws that your seeker/mystic could easily handle and will just have to make do, but if there is a round where your seeker cannot be bogged down with enemies because they need all their actions to win the scenario, this is insane. Give yourself all the enemies (are you roland or Zoey?), avoid all the horror (have fun, agnes), and give your allies the breathing room they need to win. Much like ward of protection, I think this will go in every deck that can take it as a safety against defeat late in the scenario.

There's a very interesting mathematical analysis around this card in my opinion. At first I considered each combination of possible card splits as all the possibilities this card allows you, but then I noticed that each investigator draws the cards dealt to them one at a time (presumably in mythos phase order), which means you technically also get to choose the order you draw all the cards you deal to yourself. This makes the possibilities explode even further. In other words, the order of the cards matters, and without loss of generality all we have to do is combine all the possible orders of the cards with all the possible choices of who can be assigned cards:

The math is obviously less impressive if you don't particularly care about the order that you draw the treacheries, but it's still really good:

Either way you choose to look at it, this card explodes the possibility space at higher counts. The only caveat I'd make with the math here is that it doesn't account for duplicate treacheries which will heavily cut down your options. Even still, at 4 players or even 3 players I think you need to have a very strong reason to not take this card. The main killer in this game is tempo, whether that's not having enough time to do everything before doom runs out, or not having enough actions to deal with all the threats before you become defeated. First Watch, for a ridiculously low cost, can buy you an entire Mythos phase worth of tempo. Daisy won't care about that Rotting Remains, give it to her; let's have Mark draw the ghoul so he can kill it in one shot; let Diana cancel that Frozen in Fear no one wants to deal with, you get the jist.

Who should take it? Anyone with access at 4 players, full stop. I think the card is really that good. Do you like The Gold Pocket Watch? This is kind of like a non-exceptional mini version of that. At 3 it's a bit hazier but still amazing, and I think it's worth making sure you include a copy or two. At any counts below that the card is basically useless and not worth running at all.

If you want some particular investigators:

EDIT: A new little exploit has come to light. First Watch replaces your entire Mythos phase. Say in a 4 player game you have 3-1 cards left in the Encounter deck, you only draw those cards and distribute them among 4 players, and that's your entire Mythos phase. So if there were a single card left, and you played First Watch, you effectively cancelled 3 treacheries. Now it's questionable how often you'd be able to do this: it depends on how many non surge cards you have in an encounter deck and whether that number is divisible by 4, plus some effects may mess with the numbers in other ways (eg Stargazing), not to mention scenarios where you get consistent reshuffles of the discard pile. But, if you can pull it off, it's a hell of a play.

StyxTBeuford · 12593
For me, this is a straight up replacement for anyone that would use "Let me handle this!" (and, to a lesser extent, "You handle this one!"). Being able to deal the Encounter Cards to the best target seems incredibly powerful for just 1 resource. — Faranim · 296 1/14/20
I don't know if it is an exploit the thing that you said about the encounter deck missing cards (for example in a 4 player game there will be 1 card in the encounter deck left). With my party, every time a deck is running out, we do those steps. a) If I play, lets say Prepare for the worst and me as, Mark has 4 cards in his deck,I draw those 4 cards left, I take 1 horror because I cannot take any draw action, then I reshuffle the deck and I draw the other 5. I think it is the same as in encouter deck. I am not sure what is the correct solution about this and we play with those rules as "house rules". Apart from that, I think this card is excellent and nearly game changer in ways possible. — Sotosprotos · 70 3/10/20
It says merely to look at the top X cards, then deal those cards. If there are less cards at the top than the requisite number of gators, you simply look at as much as you can and then deal as much as you can. After that part of the effect has resolved as much as it can, you only then draw the dealt cards. It would work as you describe if you were told to draw those cards instead. It's also not something I see being worth a house rule- a lot of decks reshuffle anyway, and for the ones that don't you're making a choice between using FW early on a turn it could really help you or trying to postpone it for a larger late game tempo gain. Up to you to decide what's more worthwhile. — StyxTBeuford · 12593 3/24/20
How does this interact with 'Surge'? Does one still draw a fresh encounter card from the pile that they haven't scried? — BlankedyBlank · 12 4/9/20
4

This card is hilarious when taken with either Luke in the party, or adaptably by the dreamer himself. Enemies cannot appear the dreamgate. If you give them to someone there, they go into the discard pile. Treacheries that make locations more difficult...worth a dollar anytime you can use it.

I feel people are missing the main power of this card. If the encounter deck has less cards than the number of players, you don't shuffle and draw extra cards.

This means in a 4-player game, when the encounter deck gets down to 3 or less cards, it is burning an encounter draw as well as letting you assign cards. If the deck has 2 or 1 cards left, you are burning up to 3 draws.

This effect is just amazing. It's comparable to multiple Wards of Protection (2) or (5), or A Watchful Peace, both of which are much more expensive XP wise. In a 4-player game, it's not uncommon to go through the deck twice, giving you two shots at this.

The effect is so powerful, for so little cost (0 XP, 1 card, 1 resource), and there is so little downside of it not happening (the card is still really useful in 4-player if the stars are cruel and you don't draw it in time), that to me this makes it a MUST have in a 4-player game. I'm struggling to see any reason why you wouldn't run this, unless the table already has it covered.

duke_loves_biscuits · 1028
It is good, but there is the caveat that 1. encounter decks, some of them at least, reshuffle often before they have any chance of emptying, and 2. playing First Watch later in the scenario requires not playing it earlier when you might have a particularly important round to use it on to protect yourself. For this reason, I really like the push and pull between wanting to play it late when the deck would empty, and wanting to play it at a possible inflection point in the scenario. It is a very strong card. — StyxTBeuford · 12593 9/3/21
I agree it's basically a must. Even when Surges aren't throwing off your encounter deck count, the ability for the Guardian to eat all the encounters themselves to free up the team on a crucial turn is invaluable. — Teag · 13 9/6/21