X is the number of other copies of Fortuitous Discovery in your discard pile.

Investigate. You get +X for this investigation. If you succeed, discover X additional clues at your location. 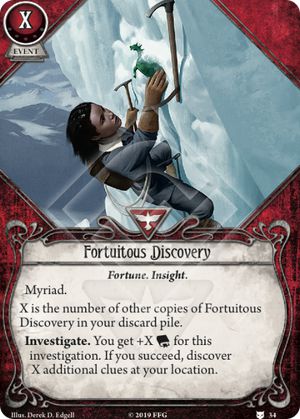 Must admit I'm struggling to think of many investigators who would want to take this card. It does look very tempting when you think about the potential action compression you can get from grabbing 3 clues for 1 action, but there are some pretty substantial drawbacks too. On the positive side, running three of these nets you 3 clues more than you could get from normal investigating, always assuming that you pass both of the skill tests. It can also be recurred with Resourceful two more times for a potential net gain of another 4 clues. Seven extra clues ? Sign me up. The issue though is that you're spending 7 resources to achieve this, so it's not exactly cheap, and in addition to that you're forced to use up 10% of the average deck solely for these cards, so there's an obvious opportunity cost involved. There are no skill pips on the card either, so the first one that you draw is a dead card in your hand that you need to find a way to discard. Wendy and Pete can both do that with ease, but they have base intellect of 3 and 2 respectively so they're unlikely to want to play this since they most likely need to boost the skill checks with other cards to ensure successfully investigating. Yorick obviously doesn't take it for the same reason, likewise Rita. I guess you could make a case for Calvin since most Calvin builds try to focus on getting horror up to 4 as soon as possible, but I still don't think this is a natural fit for him.

The standout of course is Patrice. She can guarantee seeing all 3 of them, has a ready-made way of getting them into the discard pile and has no issues with committing cards to the skill checks. She also has a larger deck size so the opportunity cost of having 3 of these is minimal. The lack of pips on the card itself is still a bummer for Patrice though, and she also has the problem that she needs to be on a location with multiple clues on the turn that she draws the card in order to get any tangible benefit from it, and if she doesn't have any book pips in her hand at the same time then she probably can't pass the test.

Off-class survivors who can take it include both Minh and Mandy. I suspect this is where it's most likely to find a home. High base intellect and the ability to pick and choose when you play it makes it a potentially powerful option for them, and in Mandy's case it should be pretty simple to find them all. That said though, there are better options available to seekers for getting multiple clues. A single copy of Archaic Glyphs would most likely net you more additional clues than you'll get from having 3 copies of this card in your deck, albeit at an xp cost.

I'm certainly going to try this card out in a few decks and see if I'm completely wrong, but as it stands I suspect it's going to fizzle.

Sassenach · 165
Cornered exists. Also, the real problem with this card is to get to the third one in a timely manner. Only Patrice can do that reliably, and i wouldn't run it even there because of her mediocre intelect. — Adny · 1 10/7/19
Actually, discarding the first card isn't an issue, now that I think about it. It's an event, you can just play it as a normal investigate action. — Sassenach · 165 10/7/19
2

It's ok in decks who have insane drawpower but it's pretty mediocre or outright terrible when you don't innately draw quickly.

Fortuitous Discovery isn't good when you get just the one copy, you need to find the second and the third to make it do anything at all, and the payoff is SLOW, the first copy does nothing, that's terrible, you drew a card only for it to do nothing?! Winging It is'nt a bad card but that first play for just -1 on an investigate difficulty is a hard sell, there's also no skill icons, how annoying. The second copy is a 1-cost Deduction, for a conditional benefit that's still just strictly worse then Deduction I'm having some serious doubts here. The third copy, 2 resources for +2 and grabbing +2 clues, huzzah, it's doing things now! Cool things sure but the ride was so bumpy that it's hard to actually enjoy the result now that it's finally here.

So, either it's just OK, or it's seriously BAD, but what if you use some strategy?

Frankly. I seriously believe that this card got kicked in the nuts in the final stage of development, somebody said "Fortuitous Discovery costing 1 resource base and discovering x+1 clues is too good", the light on printing this thing was green, the art commissioned, so it was too late to back out and print something else, so we got.. this thing....

Right now the standout good place to put this thing is Minh Thi Phan with as much drawpower as she can muster, we're talking Grisly Totem Minh Thi Phan with some classic skill cards. Even then, I can think of much more useful things to do with those 3 card slots. Winging It to start with.

Tsuruki23 · 2233
I'm pretty sure by Shards of the Void you mean Segment of Onyx. — ak45 · 407 10/15/19
Yes — Tsuruki23 · 2233 11/4/19
It’s only effective once per game, but Eidetic Memory can play a fourth copy of Fortuitous Discovery to get +4 intellect and 4 additional clues. Do not it removes the card from the game afterwards, so that’s a bit of an anti-synergy. — MaximilienQC · 1 2/14/20
What about for a Wendy deck? (I just built one and will be playing Dream-Eaters soon) You toss the early copies to get the free redraw from the chaos bag and then use the last one to nab a lot of clues. — bgraceduff · 2 6/27/20
Wendy usually plays "Look what I found". Winging It is a better card choice than Fortuitous Discovery because when exploring a shroud 2-3 location, if you fail the test on playing Winging It then you can immediately play "Look what I found" and get 2 clues anyways. Fortuitious Discover doesn't reduce the shroud to the "fail by 2" range of Winging It. — VanyelAshke · 165 12/27/20
I wouldnt dare take this in Wendy- her weakness will likely just shut off any potential bonuses before you get to use them. — StyxTBeuford · 12705 5/7/21