When you play an Illicit card during your turn, exhaust Fence: The Illicit card gains fast. If it was already fast, reduce its cost by 1 instead. 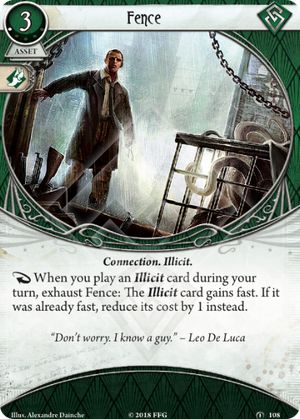 I think this card is thematically great and that an evasion-first Finn deck built with Illicit cards is extremely fun to play and very formidable in solo standard and hard. I concede that you generally only want to bring one pair of mulligan-worthy economy cards and that most rogues will want to opt for Lone Wolf. Even with Finn, especially on higher difficulties, using Lone Wolf for consistent stat-boosting is a pretty tried-and-true strategy. That said, when played early, the additional actions and advantage managing opportunity cost provided by Fence is a huge boon, especially in a lean Finn deck where nothing costs more than 3 anyway and a couple of Pay Day or Emergency Cache is usually enough to play a few key assets and a stream of cheap events. While Fence does share the same drawbacks as other economy/set-up cards (bummer if you don’t draw it until late, bummer when you draw the second one), the cards it interacts with are quite good on their own and there’s nothing sitting in your hand waiting for a dependent combo.

Playing Fence early has generally provided me with three to six additional actions in the scenario. With Finn, they’re often used after evading an enemy when getting a few things done and moving on in the same round is crucial.

Some synergies with Fence and Finn:

Smuggled Goods - from a somewhat lackluster draw to the same as drawing the Fenced-up version of Lockpicks, Lupara, or Pay Day

Lockpicks - this card just seems to love being fast; sometimes with a good opening hand, you can start on a 1-clue location, play Fence, draw a resource, then drop Lockpicks and get the clue before your first round is up

The interaction with Finn's Trusty .38 and Switchblade is less significant but helps to mitigate the initial cost of Fence.

The opportunity cost consideration is hard to quantify but feels very real when playing. The easiest example is when the encounter deck is throwing Corrosion at you and discarding Lockpicks feels a lot less painful when you didn’t already pay 3 resources for it. In smaller ways, it helps with managing resources and hand slots throughout the scenario.

As a side note, I don’t think the upgrade from Sleight of Hand is painful or that the card is particularly missed. The only really great SoH combo is with Lupara and I’d rather not wait on drawing both cards. (Lupara is still excellent with Fence, dependably performing its task of killing most enemies in one or two actions.) I know some rogues like Sleight of Hand for Lockpicks but with Finn investigating at 8, I’ve never run out of supplies before the scenario ended or the encounter deck ate the card. Just playing Lockpicks fast is the better option. I found that Sleight of Hand would often sit in my hand or get used for the heck of it and that I would rather have drawn one of the many available skills or events that more directly help me kill things or turn bad results into good ones (there are really so many to choose from for rogues).

There is definitely a fun factor element to this card but having Fence out provides a ton of benefits and feeds so elegantly into the Finn solo experience of rushing around and mostly leaving enemies in the dust except for a few big offensive rounds that I would highly recommend giving it a shot if that style appeals to you.

housh · 141
Note that drawing the second one isn't even bad, because it's not limited to 1. You can play the second one fast, then exhaust them both at once to make illict cards fast and reduce them by 1 cost. — mannerpots · 2 9/2/19
It definitely makes you feel like a badass to be fencing everything into play. Probably not a top tier card still, but very fun, and not bad as long as you get it out early enough. — Zinjanthropus · 212 5/23/20
5

This is to Sleight of Hand what Pathfinder is to Shortcut. Dont let that fool you though. This card sucks.

These cards offer compound consistency when brought together, therefor strengthening both cards since now there are more windows for you to draw and apply the mechanics they offer. This means that you can either include both in a deck or upgrade Sleight of Hand into Fence (if the Fast keyword is the effect you indeed desire, I think Sleight of Hand is the better card of the two because of the fun interaction with firearms).

I don't think Fence is a good economy card, not at all. The actions saved and resources gained get outclassed by the classic Leo De Luca by a mile. What Fence does offer however is the circumstantial but powerful benefit of allowing you save yourself the cost on items you don't actually need, until you need them.

Think of it this way: How often has it gotten in the way that you need to spend an action here and there to play the gun, to play the Lockpicks before you run at the problem at hand? How often do your assets get burned by the encounter deck and how often do you wind up not actually needing the item you played? Fence lets you be very efficient with the where and when of the cards you play.

There is a rather terrible downside to this card. The later you draw it the more cards you miss out on the Fast or returns on. If you're playing the kind of deck that warrants this card then you probably have Pickpocketing, Lupara, Leo De Luca, Chicago Typewriter and so on and on, and as it happens, those cards tend to be "Mulligan Queens", a greedy player who doesn't mulligan this for the cards that it targets is taking a terrible and useless risk! I.E, this card must be in your hand Post-mulligan or drawn very early into the scenario, all too narrow a window.

One more downside, when I played this I had Leo De Luca in the deck, I discovered that all too rarely there was any sort of window for this card to be played, or else i'dd play it at the cost of getting out a major item like Lupara or Lockpicks. I can imagine that you wont be able to afford playing this alongside a certain incoming ally.

So, if it doesnt sit well alongside Leo De Luca or Lola Santiago, where does it work? Well according my experience, alongside Peter Sylvestre in a Finn Edwards deck. Perhaps if the lineup of allies we're cheaper, then Fence would be better. But after a couple tries I just don't see the benefit until some more powerful economy Illicit options are released, Burglary level 2 maybe?

Tsuruki23 · 2348
Yeah, it's really interesting, but way too expensive in the end. To elaborate a bit on the Pathfinder comparison: Pathfinder is expensive, but it's also useful right away. Fence is expensive, but only starts helping you if you play a lot of additional expensive cards. That's really tough to make work. — CaiusDrewart · 2815 6/21/18
In addition, moving (from pathfinder) doesn't cost ressources, while most illicit items do. Investigators only have 4 slots that can hold illicit items (hands, relic, body) so you're unlikely to (re)play more than 4 or 5 such items, which hardly justify this cards cost. — Django · 4420 6/21/18
@Django: Don't forget that fence works on all illicit cards, not just illicit items. So, you could play fence on turn one, then do two other actions (drawing cards, gaining recources, playing non-illicit cards, etc..) and then end your turn with "pay day" or (if your Finn) with "smuggled goods". — Corgano · 1 10/16/18
I’m playing a clue-gathering Finn in a 3-player Forgotten Age campaign. Fence was one of the last upgrades to the deck (you’ve got to have a critical mass of illicit cards first, obviously) but it has added tons of value. Once you’ve got your economy cards in place, what you really need are actions, and Fence provides that for an illicit deck. I’m running Milan and Lola, so Leo won’t fit. — Runic · 1 3/6/19
Out of curiosity, what clue hunting Finn deck did you play? — PanicMoon · 2 6/9/20
3

Wait for the fire sale.

Its fine, and it has great synergy with Finn. But we also are waiting on a few more cards to make it great rather than good. Especially at a cost of 3.

It lets you throw out typewriters, Lupara, lockpicks and booze and still do stuff which is also great. Especially for the typewriter which loves the saved actions.

But the cost is nothing to sneeze at. I guess it can also save you money or actions... so maybe it is worth it.

Test in Finn, Leo and Skidds. Skip on most of the others.

EDIT- Seen a lot of chatter on this card regarding Joey. Its not worth the slots in my opinion.

But I think it might be worth combining with Burglary. Turning Burglary into a fast action to play means that you are getting money back on it after the second use, rather than the third. Saving tempo on it means the card becomes a lot better.

Plus the flavor slam dunk of combining burglary and a fence.

Myriad · 1151
It's very nice that using this on illicit weapons prevents AoO, making it easier to kill a monster without having to evade first (so, for not Finn). — SGPrometheus · 687 6/15/18
Your illicit weapon choices are Lupara (which ignores the downside) typewriter, switchblade (which is already fast) and Derringer. While skids can run these I think he is probably fine with just sleight of hand and daring maneuver. I currently wouldn't bother with this card outside of Finn. And even then it struggles for it's slot. — Myriad · 1151 6/16/18
I meant close call, not daring maneuver. — Myriad · 1151 6/16/18
You meant Narrow Escape, not Close Call. — Katsue · 9 6/19/18