It was an old gun - battered, scraped, and well used - but it had never let him down.
John Pacer
The Forgotten Age #11. 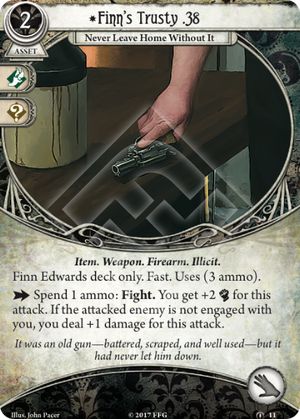 First off, I can't believe nobody has written a review for an investigator signature card after 4 years after his release, so I suppose I'll give it a shot (heh). Second, Finn is a strange investigator. This signature card is a cherry on top of a weirdness cake for him.

With this gun, Finn is able to shoot eldritch beings 3 times at 5 . You always get the bonus +2 score, and +1 damage if the enemy is not engaged with you (i.e. evaded). It's fast, costs 2 resources, and is illicit.

Finn's gun can be closely compared to the .25 Automatic from the Innsmouth Conspiracy, which costs 2 additional resources, only gets the damage if the enemy is exhausted, and provides 1 additional ammo. Playing Finn, both of these weapons feel very similar in playstyle, since you're able to evade for a bonus action, you pretty much always get the +2 and +1 damage.

When searching your deck with Smuggled Goods, you are almost never searching for Finn's Trusty .38, but rather something like Pickpocketing, Lockpicks, Liquid Courage, or really any other illicit card. But when you do hit Finn's Trusty .38, you can say "Hey, I just found a Manual Dexterity!" That's often what I find happens to this card. It just isn't used, and is usually pitched for its skill icons.

Fighting at 5 is alright, but you'd really want higher numbers if your teammates are going to let you take shots at monsters engaged with them. I can see where this card can become useful (True solo, or if you've got boosting cards), but Finn's pretty much made for clue-getting, so this seems like a last resort. He can dip into seeker cards, he's got base 4 , he has lockpicks on-class, and the man's even picks up clues for Cthulhu's sake!

So, in summary, this gun seems like a wasted draw most of the time. Sure, it can be used in a pinch, but Finn was made to evade, get clues, and run away. You really want some good support for this card, like Sharpshooter or Hard Knocks (although "good" is a debatable word choice to use for this support). I'd say in most scenarios, you're better off leaving this one at home.