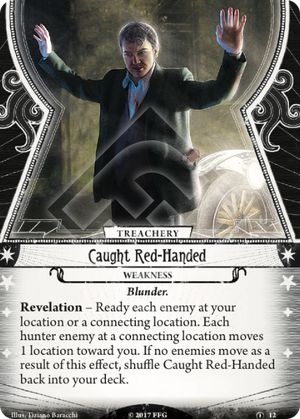 I love how this card interacts with one of Finn Edwards best assets: Pickpocketing. You evaded an enemy and now you get a draw? Yaaay! Oh no, you got Caught Red-Handed. Not only do you lose the draw, your evade was wasted too. And since 90% there won't be another enemy near, Caught Red-Handed gets shuffled back into the deck. Awch!

Of course, the more people you play with, the more chance there is that there will be a hunter enemy at a connecting location. But even though I play most my games with 3, I've found that hunter enemies appear at connecting locations quite infrequently (since you want to kill those ASAP). And then you need to draw Caught Red-Handed at that exact moment to get rid of it.

I like (and hate) this weakness because it really makes you think whether it's truly worth risking that draw from Pickpocketing, especially if multiple enemies are exhausted. An easy way to get rid of this weakness is good old Mr. "Rook", being able to move away from the hunter enemy and exactly time drawing your weakness. However, it does take one of Finn's valuable Seeker/Survivor slots, and competes as an ally slot with the very important Peter Sylvestre (as Finn takes more horror than most with his low Willpower).

Nenananas · 156
For me Mr Rook is disposable, i wouldn't count him as occupying your ally slot. At the latest when his secrets are used i either replace him or i assign the final damage/ horror. — Django · 3361 9/3/20
Because Caught Red Handed actually moves an enemy toward you it can actually save you an action to move and/or engage an enemy if you're intentionally drawing it with Rook — Zinjanthropus · 159 9/3/20
It's a pretty gentle weakness as these things go, I think. If you draw in it in upkeep it doesn't do anything by definition because the enemies have just readied, and even if you draw it in your turn it typically wastes an action at most. It's only really dangerous in situations where there are more enemies at your location than you can safely re-evade or there's a hunter boss you're trying to do something clever with. And even in those situations it maybe just means you get attacked by an enemy or two. There are much worse worst-case-scenario results from signature weaknesses , lol. Even Tony's Quarry, which I think is also pretty tame, can cost you a whole round's worth time, if you draw it in the upkeep where the agenda is And it can even be helpful from time to time. If you've evaded a hunter enemy and moved away, (Vengeance enemies in TFA , for instance) it can attract it to you so you can evade it again w/o doubling back or getting attacked. And it's always funny when the hunter enemy it attracts is another weakness enemy with Prey : Someone else only and it can't do anything to Finn xD — bee123 · 24 9/3/20
I agree with your review. I have intentionally decided not to trigger Pickpocketing at times because I could not risk drawing this weakness (and didn't have time to do additional evades during my turn). — iceysnowman · 147 9/3/20