Fast. Play only during your turn. Reduce the cost of this card by 1 for each different class among cards you control.

Move to any revealed location.

The true journey is the one we take in our minds.
Juan Carlos Barquet
Edge of the Earth Investigator Expansion #36. 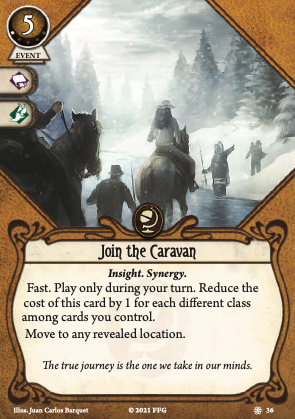 I think this card is strong, and going to be pretty popular (as long as you're playing anything more than a monoseeker deck).

While Seekers do get a number of cards that let them be nippy - Shortcut, Pathfinder, this card has three things that make it worth the cost.

I'll mention that it has a single intellect and agility icon, which is something I guess if you really need them. But you'd never want to throw this into a skill test.

In conclusion, 1xp and 3ish resources for an instant "get me anywhere" card feels like a solid and powerful card. It's not cheap, and you might only pack a single copy. But. It lets you to flash to support any other player, to flash to any player to get support, or the safety to stay in a location to get that final clue. The list goes on. In short, it gives you a lot of options to capitalise on, and big ol' safety net to boot.

knockthrice · 49
It gets even better for Joe. With the insight trait you can play it fast often for only 1 ressource — Tharzax · 1 9/14/21
"the only exception might be very near the start of the game" You mean, if you are Lola, and did not take "Shrewd Analysis"? All other investigator control at least one class card: their Investigator card. — Susumu · 271 9/14/21
According to https://arkhamdb.com/rules#Ownership_and_Control you control all the cards in your hand, deck and discard pile. — david6680 · 43 10/27/21
Yes, David. But also, see RR on Ability: "Card abilities only interact with other cards that are in play, unless the ability specifically references an interaction with cards in an out-of-play area." That's why control of cards in out-of-play Areas does not "synergize" with this card. — Susumu · 271 11/10/21
I like all the synergy cards to play with the Dunwich investigators and the new level 0 permanents. In Rex Murphy I had three different permanents out, so never paid more than 2. With things like Eon Chart, Ice Pick, Professor William Webb or Crafty I even got down to pay it for free. — Miroque · 21 12/18/21