You can only include this asset in your deck by upgrading it from Cryptic Grimoire (Untranslated), and only if "you have translated the grimoire" in your Campaign Log.

: After you resolve 1 or more tokens during a skill test: Place that many secrets on Cryptic Grimoire.

When you would draw the top card of the encounter deck, spend 5 secrets: Draw a card from your deck instead. 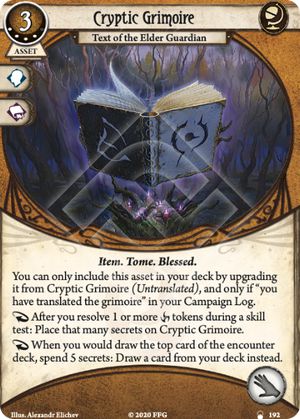 I'll leave my original review down below, but like pointed out by Thatwasademo, the recent FAQ actually proved wrong my understanding of Uses. (And that from the people, who told me, that I should not have action-free translated the Archaic Glyphs with Astounding Revelations, when I played Mandy.) I still think, that 5 secrets are a hard ask for an effect, that does not even trigger before knowing, which card you avoid, and is trounced by the effect from A Watchful Peace from class in the same cycle, at least in multiplayer. Text of the Elder Herald is likely the stronger card of the two, but I'm now actually interested in translating the damn thing. I will update the review, once I have actual played with these cards.

So now Seekers have their way to mitigate the encounter deck just like a Mystic, do they?

Let's compare that to the staple core set Mystic card for that cause, Ward of Protection. It costs 2 resources and an action more to play, and doesn't cost you a horror. And I think, it won't be likely usable more than once, even if you play the card early. There are no "Uses (X secrets)" on the card, so you can't fill it with Astounding Revelations, Eldritch Sophists and the like. You only get secrets on this card, if you (not any player) resolve -token(s) during a skill test. You can't cancel the token(s) drawn either, and likely fail the test or at least gain one clue less than otherwise. So to charge up this grimoire once, you likely loose 2 to 5 actions. (On top of what your fellow investigators might loose, when they draw a .) It won't help, if you draw a on some other occasion, like Daisy playing Voice of Ra. You are paying 3 resources, a card and an action upfront to possibly save yourself an encounter draw and replace your card with a delay. This seems really weak for an unconditioned level 0 card, let alone something that requires 4 XP and a "quest" fulfilled earlier in the campaign. We probably shouldn't tax the 2 to 5 lost actions, because there should be other incentives to put -tokens into the bag than this card. It's OK, that different classes don't excel at all tasks equally. That's part of there theme and diversifies game play. Mystic's Astral Travel ain't a Shortcut, and that's fine. At least, it does not cost 4 XP!

Compared to the other Cryptic Grimoire, the 5 -threshold also looks unfavourable. This one is more to compare with Chuck Fergus, who is more flexible, grants a bigger discount, gives some soak and will likely be activated much more often in any given game. But at least he costs 1 XP more. I think, you still must reliable put at least 6 secrets on that one to get some use of it, which is much easier to archive than 10! (With 4 you only trade 3 resources, an action and a card to 2 resources and 2 actions, so basically buying an action for a resource, a card and some upfront cost.) I'm not really impressed with either version. "Quest cards" should give you something amazing for the extra effort. In particular since this one isn't the easiest to fulfil. I'm not sure, if I would take this path, even in decks heavily investing in to get some extra mileage out of them.

Susumu · 150
If want to control the encounter deck in seeker, use seeker scroll of secrets (3). Draw the last 3 cards of the enc dey, maybe discard one and put them on top in any order. Use Eldritch sophist, Adrianes twin,... to recharge it. Or versatile scavenge it. — Django · 3610 1/29/21
Sry for double post. I think both of these grimoires are good to generate secrets and move them with eldritch sophist to old book of lore 2, rook, scroll of secrets 3,...; Seeker has some ways to generate curses (Deep Knowledge, Stirrin up trouble) and their covenent allows them to ignore the modifier. — Django · 3610 1/29/21
I'm pretty sure you can use secret manipulation to get more secrets on this - the rules about uses only forbid putting uses on a card with a different uses(x) type, but they don't forbid putting them on a card that doesn't have uses(x) at all. — TheNameWasTaken · 3 1/29/21
If your intent for these cards is just to generate some secrets for other cards, you can sure get them for half the XP using "Shrewd Analysis", as it really doesn't matter which one you get for this. This might actually be worth it in a curse deck. "Astounding Revelation" taxes a secret roughly like 2 resources. So you would need at least 3 secrets to be put onto the card to come slightly above breaking even. Still, that's not the use I want for a quest card, that wastes actions on early scenarios. — Susumu · 150 1/29/21
@ TheNameWasTaken: the RR defines "Uses" as the keyword ability. Since the Grimoires don't bear the keyword, the rule for transfering uses onto the card does not aply. It's the same with the untranslated "Archaic Glyphs". You can't place secrets on them by any other means than the action on the card. — Susumu · 150 1/29/21
I think looking at this card in a vacuum is the wrong approach, sure in a vacuum 5 curse tokens are crippling, but throw in seeker covenant and instantly it turns from "fail five tests" to "exhaust a permanent five times". Out there right now is the potential for a curse cycling deck that never draws encounter cards and one day soon it will exist, but for now maybe the all curse build is still too far away. — Zerogrim · 190 1/30/21
Sure, the seeker covenant will help you pass the test, and even put the curses back into the bag, so you won't decrease the odds of drawing them again. Still, I doubt it would helf you a lot, to resolve 10 or 15 tokens. And 3 resources, 4 XP and a quest are to much to call for an asset, that has the "once per game" option to draw a card from the own deck instead of the encounter deck. This card would need despertly some support (like the keyword "Uses (0 secrets)." to get somewhere around being decent. — Susumu · 150 1/30/21
@Susumu That's the point - you *can* use secret manipulation effects on the lv0 glyphs, and you can use them here. If you can't, then Tony's bounty contracts don't work at all - enemies don't have "uses(bounties)" in their text boxes, after all. So either you can put bounties on enemies and secrets on cards without uses(secrets), or you can't do either and we have an investigator whose personal permanent is blank. — TheNameWasTaken · 3 1/30/21
@TheNameWasTaken It's just specific beats general. If a card specifically tells you to put a secret/bounty without "Uses", you can do so. — Nils · 1 1/31/21
*on a card without "Uses" — Nils · 1 1/31/21
Yeah, I think the fact, that "Bounty Contract" specifies to move them on enemies (not just cards) makes it apply the "Golden Rule", that a card text may contradict a general rule. When I was playing Mandy, I translated the Glyphs using the reaction trigger of "Astounding Revelation". And I was later taught, this was cheating. — Susumu · 150 1/31/21
But Bounty Contracts doesn't say ".. an enemy, even if it doesn't have Uses(Bounties)". It just says "an enemy". So why wouldn't the same apply for Astounding Revelation? — TheNameWasTaken · 3 1/31/21
That is a good point. Perhaps we need a collection of "Uses". Basically everything that is denoted as "Uses" on any single card is restricted. Everything else, like "Bounties", is not "Uses" and therefore doesn't follow its rules? I don't know... — Nils · 1 3/20/21
Check the recent FAQ on Enraptured if you're still confused about this point — Thatwasademo · 39 3/21/21
Official FAQ answer (see Enraptured) "You can technically add secrets to a card that doesn’t have uses, there is nothing in the rules to prevent you from doing that. Normally this won’t help you at all—if you add a secret to a machete, it won’t do anything for you whatsoever—but there exist cards that use secrets even without the uses keyword, such as the untranslated Archaic Glyphs and enraptured will surely combo with them!" — Mataza · 15 7/22/21