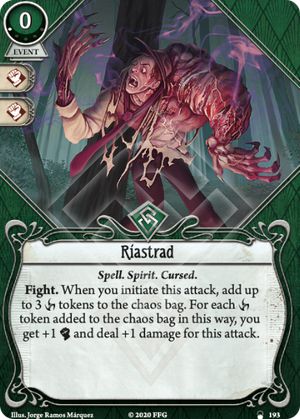 To pre-emptively answer your question:

"[Irish mythological hero/demigod Cú Chulainn] is known for his terrifying battle frenzy, or ríastrad (translated by Thomas Kinsella as "warp spasm" and by Ciarán Carson as "torque"), in which he becomes an unrecognisable monster who knows neither friend nor foe."

(Merely here due to Irish mythology? Or also the influence of Marvel Champions?)

from The Táin (Táin Bó Cúailnge) [translation KInsella]: "The first warp-spasm seized Cúchulainn, and made him into a monstrous thing, hideous and shapeless, unheard of. His shanks and his joints, every knuckle and angle and organ from head to foot, shook like a tree in the flood or a reed in the stream. His body made a furious twist inside his skin, so that his feet and shins switched to the rear and his heels and calves switched to the front... On his head the temple-sinews stretched to the nape of his neck, each mighty, immense, measureless knob as big as the head of a month-old child... he sucked one eye so deep into his head that a wild crane couldn't probe it onto his cheek out of the depths of his skull; the other eye fell out along his cheek. His mouth weirdly distorted: his cheek peeled back from his jaws until the gullet appeared, his lungs and his liver flapped in his mouth and throat, his lower jaw struck the upper a lion-killing blow, and fiery flakes large as a ram's fleece reached his mouth from his throat... The hair of his head twisted like the tangle of a red thornbush stuck in a gap; if a royal apple tree with all its kingly fruit were shaken above him, scarce an apple would reach the ground but each would be spiked on a bristle of his hair as it stood up on his scalp with rage."

(Honestly, I'm disappointed we didn't get some flavor text excerpting a translation.)

anaphysik · 72
I do not mind that we do not get more flavor. I think the name speaks for itself. It's great when you can read up the story of a card and you start to appreciate the link between theme and mechanics. Another great example in this regard is Key of Ys. — PowLee · 13 5/4/21
Bah! If there's empty space on a card then there's a literary quote to go there, I say! (Yes, I realize this is generally not correct graphic design and am being a bit hyperbolic.) The game is based on a large amount of literature (by many authors) which is itself steeped in long histories of literary tradition and influence, and which themselves contain storytelling themes and motifs that have resonated not only through this body of literature but throughout diverse human cultures and storytelling. Providing extra explicit reference to that storytelling mythology doesn't detract from the experience of doing one's own deep dive into it -- instead it amplifies and directs it. I think we should be encouraging the designers/templaters to include more references, and from more and more sources. Yes, you're correct that merely having Riastrad as a card is a cool step -- but the card could've gone further in the learning experience. — anaphysik · 72 5/4/21
I agree. Flavor text is always welcome, especially when it's introducing a horror like this. — TheDoc37 · 460 6/3/21
I don't know if most would agree but I would love it if every card had flavor text. They don't all have to be serious, some can be light hearted (there is probably a better example but sledgehammer randomly comes to mind for me). — fates · 17 4/21/22