Spend 1 ammo: Fight. You get +1 for each bounty on the attacked enemy. This attack deals +1 damage. If this attack defeats an enemy with 1 or more bounties on it, place 1 bounty on Bounty Contracts. 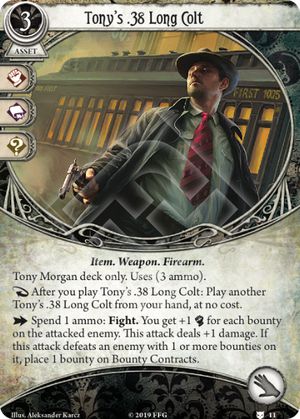 So in combination with Bounty Contracts this pretty strong. Use this to either keep topping up your bounties; to give extra actions when you kill lots of relatively basic enemies (even a rat exterminating job isn’t beneath Tony!); or as a stronger weapon against a difficult enemy with up to +3 strength available. With Tony’s 5 strength line, an attack of 8 is a very strong option against even the most advanced elite enemies.

Better yet, with two chances of drawing it from your hand there is a good chance of drawing it near the beginning, giving the option of using your bounties more generously.

Realistically it is unlikely you’ll be in a position to activate that trigger and get two colts out for a single action.

(edit: thanks TheNameWasTaken for spotting that there is no synergy with Sleight of Hand, which doesn’t “play” but “puts into play”, so no trigger to allow both colts out on the cheap)

Regrettably few ammo for what you’ll want to use it for, so it’s a good bet that Contraband, Extra Ammunition (if you are a guardian) and Sleight of Hand will be pretty good options, likely to complement other cards you’ll have in Tony’s deck.

Phoenixbadger · 180
There is no interaction between the Long Colt and Sleight of Hand. Sleight of Hand puts the colt into play rather than playing it, but the colt's reaction triggers on it being played. — TheNameWasTaken · 3 4/27/20
Ooh, well noticed! good rules lawyering. :-) — Phoenixbadger · 180 4/27/20
I’d suggest Swift Reload over either Contraband or Extra Amunition. It’s fast, so I can always fit it in between attacks when needed. — Death by Chocolate · 1256 4/28/20
With the tabooed version of Sleight of Hand, you can't play Tony's .38 Long Colts. As a signature card, this doesn't have an XP cost, thus it isn't a level 0-3 item. — LeFricC&#39;estChic · 86 5/4/21