Fast. Play when you would discard a treachery card after resolving any of its effects.

Put "Fool me once..." into play in your play area and attach that treachery to it.

When any investigator draws a copy of the attached treachery card, discard "Fool me once...": Cancel that card's revelation effect. 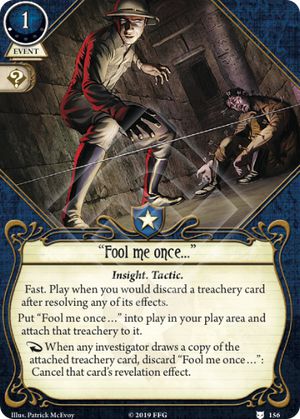 "Fool me once..." offers a similar promise to Mystic staple Ward of Protection of protecting you and your party from dangerous treachery effects. I say "staple", but actually I've recently gone a little cold for Ward because it turns out taking a horror along with spending a card and a resource is a fairly steep price against most treacheries, although it sometimes is worth it to protect vulnerable teammates or to just cancel the harsher treacheries, such as Ancient Evils. How does "Fool me once..." compare?

"Fool me once..." still costs a card and a resource, and while it doesn't deal you horror out of hand like Ward does, it does demand you actually resolve and discard a treachery in order to prevent a future copy of it. Now, you'll still count as having resolved the Revelation ability on a treachery that you passed a skill test for; the good news is in theory "Fool me once..." sometimes costs you merely a card and a resource, but this means you'll have to suffer at least one Ancient Evils in order to cancel the next one. Additionally, this card demands that you resolve the treachery to be cancelled, and not a teammate - so you have to draw it before they do if your intentions are selfless.

On top of that, not all treacheries with dangerous Revelation effects actually discard themselves until they're already done hurting you pretty bad, such as Dunwich encounter spoiler and Circle Undone encounter spoiler. Ward of Protection does better against those, and is generally much more flexible in what it can cancel. It has been pointed out that you can "trap" a treachery attached to "Fool me once..." by keeping it in play so that it doesn't shuffle back into the encounter deck, but unless you were highly likely to draw that treachery twice again during the scenario, you were just as good if not better cancelling a second copy with "Fool me once..."'s reaction.

So, when is "Fool me once..." good? I think much like Ward of Protection, this card isn't going to be something you spend experience on for all investigators for whom it is available. You ought to have a good idea of why you're buying "Fool me once..." and the kinds of treacheries you intend to use it to fight. You might for instance take this if you or a teammate is particularly weak to willpower treacheries. Notably, "Fool me once..." is likely to overperform in The Forgotten Age (perhaps this is being alluded to in the art?) due to the Explore mechanic allowing you to dig for treacheries early in the scenario.

Additionally, the more teammates you have, the greater the likelihood that the same treachery is drawn repeatedly before the scenario ends. In a 3 or 4 player group, "Fool me once..." goes especially well with First Watch and "Let me handle this!" to really control the Mythos phase and improve the odds of you drawing the treachery you want to cancel before someone else does. Obviously this synergy is going to be most effective in investigators equipped to take on multiple encounter cards, which typically means those with high willpower - so Zoey Samaras, Leo Anderson, and particularly Diana Stanley who loves that magic word "cancel".

Even if this card is as situational as I believe it is, it's still nice to see the Guardian archetype of protectively tackling encounter cards continue to be fleshed out, and I'm definitely a fan of the concept and theming.

aeongate · 37
It's a very hard card to maneuver around in my experience. Ancient Evils even requires that you draw one of the copies. I think it works best in Guardians who can Stick to the Plan and increase the number of encounters they see with this "in hand". — StyxTBeuford · 975 3/6/20
This is good in TCU cause the encounter deck mills itself to trigger effects when it runs out. Also fool me once can be used on treachery weaknesses — Django · 2365 3/7/20
I actually find it's really bad in TCU despite the encounter milling because so many of the treacheries are sticky to begin with. The discard clause just doesn't activate nearly as often as you think it would. Hitting a weakness in your deck to keep it from cycling is good, but only if you're playing a very cycle heavy deck, which in Guardian or sub-Guardian right now I think is mostly limited to Roland? — StyxTBeuford · 975 3/8/20
Joe can draw lots with access to seeker 5 — Django · 2365 3/8/20
Sure but I don't like this in Joe for several reasons. As a hunch it's near useless since it's not in play during the Mythos phase. As a maindeck card you're still reliant on finding this card (easier in Seekers sure) and then discarding the treachery while this is in your hand, which, the lower your willpower, the harder that is to do. Sure, you can counter one Rotting Remains if you happen to draw two of them, but you could just as well throw in another ally or some healing into your deck. Take the Initiative works better than this in most cases. — StyxTBeuford · 975 3/9/20
Note that you don't have to be the one to *draw* the encounter the first time; you have to be the one to *discard* it. For treacheries that go in the threat area and are cleared with an action, you can play "Fool me once..." as long as you're the one to discard it, regardless of who drew it. — Yenreb · 1 3/10/20
Yes, but realistically Joe still can’t do much with that. — StyxTBeuford · 975 3/11/20
0

Useful, but hard to deckbuild. slots, while not as contested as, say, deckslots, dont have too much space for tertiary strategies. If you do afford the deckslot for "Fool me once..." its a useful but not terrific card. Diana Stanley loves her some cancels though, so keep this in mind for her.

The mechanics speak for themselves, (although keep in mind that the card is played on treacheries -while they are being discarded-, keep that in mind if you want to hit something like Frozen in Fear), but the inability to surgically hit whichever treachery you like is a drawback. Think of it this way: Sometimes you play Ward of Protection against Rotting Remains to cover someone for whom a failed check equals defeat, but usually you dont block a minor treachery like Rotting Remains at all. "Fool me once..." doesnt have this precision. The most bang for your buck is hitting treacheries that are universally bad, Ancient Evils for example.

Obviously a greater playercount increases mythos drawspeed, so the usefulness goes up a bit, but in this case the chance of you personally encountering the desired target (a requirement for playing "Fool me once...") goes down dramatically, so that in of itself is a problem too.

"Fool me once..." is'nt bad, but it's largely inferior to similar mechanics and it's costing space and resources in a faction that often struggles to generate resources and cards. You will be forgiven for not ever trying this thing out.

The Guardian's answer to Ward of Protection. While this doesn't cancel the effect of the card drawn by the playing investigator, the ability to block the next copy can be very valuable, especially for treacheries that stack and build up or draw out a scenario enemy (such as Daemonic Piping) or generally annoying treacheries like Ancient Evils. In a 3 or 4 player group where you are cycling through the encounter deck fairly quickly, this is a strong addition for those who can take, and all for only 1 XP!

c-hung · 2
Daemonic Piping is actually a bad example here, since the treachery has to be discarded first. By the time Piper of Azathoth is discarded, it's generally already gone and summoned the Piper. — Abodmuthkat · 147 1/2/20
That said, an interesting note here is that the cancellation effect is optional. So if you did manage to discard it (maybe with Alter Fate), you can choose to keep it trapped instead of cancelling other copies of it. — Abodmuthkat · 147 1/2/20
Except Daemonic Piping would still be in play, and thus trigger the summoning if all three go up. That said, Terror in the Night is countered by this. — Abodmuthkat · 147 1/2/20
Ah, good catch. OK, so maybe can't tie up every treachery card, but still very handy to have to block a number of annoying treacheries at low cost. — c-hung · 2 1/2/20
Could Diana counter a treachery with ward of protection and then use this card to counter later versions of it? — crayne · 2 1/2/20
Only if you resolved any of its effects (which could include Surge I believe), otherwise no. So Warding an Ancient Evils doesn't let you FMO the next one. Personally I have a really low opinion on this card because of how reliant it is on being drawn early and how many high impact treacheries don't discard initially or at all in some cases, especially in TCU. — StyxTBeuford · 975 1/2/20
Like Terrot in the Night could be countered by this, sure, but that's only relevant in terms of reshuffles anyway- if you passed one Terror in the Night test to even trigger FMO in the first place, you're fairly unlikely to have to worry about all 3 copies ever being in play at once, so FMO's very unlikely to have any effect at all. — StyxTBeuford · 975 1/2/20
It seems like a super niche card, for sure. Can it counter weaknesses? If so, Lola might have some use for it, maybe. Or in some campaigns, where everyone gains a copy of the same weakness at some point? Other than that , maybe it's a card for 'treacheries-drawn-in-weird-circumstances". Like you could use it to put a stop to "draw the top omen in the discard pile". Or for exploration treacheries? Like it seems like a decent answer to that one endlessly annoying card for the Boundary Beyond. Other than that, it seems expensive in xp and deck-slots for the amount of conditions you have to meet to use it effectively. — bee123 · 16 1/2/20
It does work on weaknesses, so a Mr. Rook deck could use it to kill a weakness permanently for deckcycling. Funny enough this works with Dirge of Reason but not with Cover Up, so the version of Roland you use matters. — StyxTBeuford · 975 1/2/20
I agree Explore makes sense to use this on. Timeline Destabilization seems like a bad target though since failing it doesnt cause it to discard. Works well with Window to Another Time however. — StyxTBeuford · 975 1/2/20
Yeah, that discard condition is far more obnoxious than it seems. So many important treacheries don't discard, and a lot of weaknesses don't either. But yeah, it seems like a Circle Undone card with the stacking treacheries but I think TFA is its campaign if anything is. Exploration, the poison treacheries, some City of archives stuff too, but even then it can't get at other people's peril cards , can it? It's sooooo situational :( — bee123 · 16 1/2/20
Yeah it only attaches on something you draw. Then it becomes useful towards anyone else drawing it, but that initial condition and timing is harsher than I think people seem to think it is. — StyxTBeuford · 975 1/2/20
I use this card with Diana and believe that " resolving any of its effects" includes no effect after being cancelled by ward of protection. This works well with daemonic piping also as you would discard it once the revelation effect is cancelled by a ward. — Head Rat · 1 1/5/20
Surge applies after the card's revelation effect and the card is discarded (unless otherwise stated), so if you cancel the revelation effect then when you discard the card you haven't resolved any of its effects yet. Then surge applies. — Yenreb · 1 1/6/20