A Test of Will

Fast. Play when an investigator at your location draws a non-weakness treachery card.

Cancel that card's revelation effect. Then, test (3). If you fail, exile A Test of Will.

With or without hope, all you can do is resist.
Stanislav Dikolenko
Stella Clark #23. 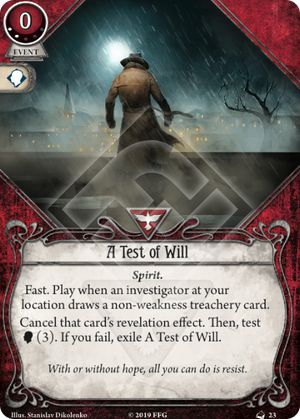 Normally, I'd would entertain the idea of having a chance to not exile a card, especially if it's determined by a moderate difficulty test of a skill that many investigators in this class excel in, and also gain a 1 resource discount for 1 additional XP.

But the very same pack that introduces this card also contains a card that lets you return its cheaper variant back to your deck for FREE in between scenarios. Both copies, potentially. Understandably, you might not have Unspeakable Oath, or maybe, you really don't want to chance exiling your Test of Will. This pack gives you an even CHEAPER alternative with the exact same effect. The only thing that this card affords you over its Lvl 0 version is that the effect is guaranteed to happen in Lvl 2, but then you have to pass the exact same test in order to keep it from being exiled. If you weren't confident enough in passing that test to settle for the Lvl. 0 version, what makes you think that you can salvage the Lvl 2? In that case, you're just flushing an extra XP down the drain; I'd rather take my chances on the Lvl 0.

The biggest benefit this card is supposed to give you is saving your XP from having to dump it into upkeeping its exiles, and you know what, if you just bought 1 copy for the fun of it and wanted to see how far you could get without losing it, then sure, this card obviously has more sustainability over time than Lvl 1. But if you're including this in an exile deck or planning on buying 2 of these, just use Lvl 0 for lower difficulties and Lvl 1 + Deja Vu for higher difficulties. This card really has no place in your deck given the alternatives. If you don't have Unbreakable Oath, just pretend these cards are Lvl 1 problem solved :)

TheDoc37 · 461
Generally agree, although one thing to note as Stella, if you have this a test of will, and commit "neither rain not snow" you essentially autopass, because even if you fail, you cancel the treachery and don't exile the card — NarkasisBroon · 9 9/14/20
Damn, good point Nark! — MrGoldbee · 1241 9/14/20
It definitely fits a new design space that I am unsure how I feel about. 2 XP in Survivor gets you so many good cards, it seems like either going hard into Exile or just stiicking with Level-0 is more attractive. — LivefromBenefitSt · 907 9/14/20
Deja Vu also exists, and if I have that card already, I think I prefer unsure if exile over unsure if cancel — StyxTBeuford · 12725 9/14/20
But, if you are going with Déjà Vu, you've already committed to Exiling cards. You might as well go with Test of Will (1), because you can replace it for free. ToW (2) just lets you gamble with XP, which isn't that fun a game from where I'm standing. If I want 2 XP Exiles, I think Fortune or Fate or Stroke of Luck are better choices, but that's me. — LivefromBenefitSt · 907 9/14/20
If your willpower is high enough, it becomes an XP savings in the long run since you will almost always pass that test. — StyxTBeuford · 12725 9/15/20
Take Deju Vu twice and just leave yourself open to get 2 xp exile cards back, if all of them are conditional then you don't want them all to exile in the same game so having random chance attached to each one is good. — Zerogrim · 248 9/21/20
I think 2 Déjà Vu would just give you 1 XP for 6 cards. If you are examining six cards per scenario, that is impressive. — LivefromBenefitSt · 907 9/23/20
only other benefit I see with this one is again for Stella - she plays this with the intention of failing the Will test, meaning she cancels the revelation effect and gets an extra action during her turn that round. Maybe expensive for the 2xp (even with the Deja Vu discount), but something to consider if you like more actions at critical moments. — Krysmopompas · 288 9/29/20
There is one additional benefit to this version over the lvl 0 in Stella. If she commits her signature and fails she gets to keep this card, cancel the encounter, and gets the extra action on her turn. — jsronce · 1 10/19/20
One other difference: This card doesn't need resources to play it, which could be important for a Dark Horse build. — fuzzlepuzzle · 1 7/26/22