Five of Pentacles
From the Brink

When the game begins, if Five of Pentacles is in your opening hand: Put it into play.

It is time to rise up again.
Chris Peuler
The Circle Undone #39. 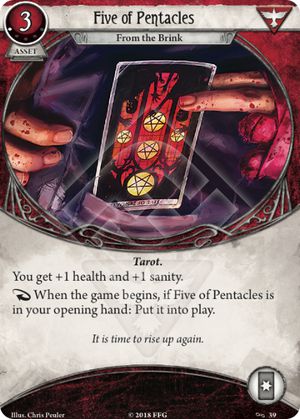 I think this is the worst of all the tarot cards because health and sanity are not relevant if you survive and the survivor class arleady has lots of cheap soaks, like Leather Coat, Cherished Keepsake, Madame Labranche and Peter Sylvestre. At least FFG remains consitent in releasing the weakest cards for the survivor faction, most of the time (and the fact that there's no 4 or 5 XP cards for them).

However for Calvin Wright this card is pretty good, as it increases his max health and sanity. So it's like +1 to all his stats.

Django · 2383
Agnes will take this over Four of Cups every time — Adny · 1 2/1/19
Why would she? I'd rather have +1 will as mystic than +1 HP/sanity. Mystic also has Fearless and other sanity healing. — Django · 2383 2/1/19
As any other mystic, yes. But Agnes has already more will than (almost) any other mystic and that +1 sanity lets her use her special ability one more time. And that +1HP helps keep Peter(2) around longer — Adny · 1 2/1/19
Ashcan Pete has better utility out of these because it potentially keeps Duke alive longer, and he can pitch a second copy to ready an asset. Never having dead cards makes two copies fine for him (or if you get that annoying tarot weakness). — The_Wall · 162 2/1/19
I think it’s worth noting that for Wendy, Ashcan, or anyone running Cornered, the second tarot isn’t dead. — Death by Chocolate · 13 2/1/19
@The_Wall Ashcan’s ability doesn’t help with the tarot weakness because you can never choose to discard a Weakness. — Death by Chocolate · 13 2/1/19
@death by chocolate the rules state that you cannot optionally discard a weakness from hand. Once it has been played, I believe you could replace it with another card in that slot. — saintsaturn · 1 2/3/19
I think this is probably the best one just because of the synergy with Wendy, Pete, and Calvin. The first two being able to negate that dead card downside is huge. — housh · 77 2/3/19