Investigate. Choose an enemy at your location. You get +1 for this investigation for each damage on the chosen enemy (to a maximum of +5 ). If you succeed, discover 1 additional clue at this location. This action does not provoke attacks of opportunity from the chosen enemy.

Joshua Cairós
The Search for Kadath #114. 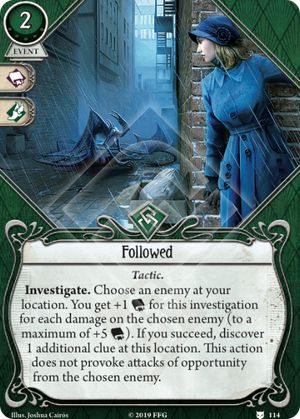 Followed is a weird card because it's good for builds since they can carefully dictate their damage, yet it's also decent for offensive builds like Tony, Mark, and Leo because it doesn't provoke attacks of opportunity. I don't think there's yet an investigator who adores this card since they can probably get by with off-class tech, but the card itself has great theatrics, and does it's job pretty well all things considered.

Compare with a few other cards of similar effect at lvl 0, each granting 2 clues:

I took it in my Sefina deck on a whim because I wanted something to pick up a few spare clues (and naturally I wanted an event), but we already had our cards stretched pretty thin between Akachi and Luke in our Dream Campaign. Eavesdrop wasn't going to fly because of Sefina's piss poor and obviously Preston wanted Intel Report, so you could say I was stuck with Followed. How did it fair?

Pretty well honestly. Fighting in an evasion deck usually means dishing out incremental damage. Hatchet Man, Sneak Attack, Delilah O'Rourke, Coup de Grâce, and even Backstab deal a specific amount of damage that is test-less (you typically need to evade but that's easily handled with Suggestion or Stealth - Blinding Light in my case) and easy to control (as opposed to erratic damage like .41 Derringer, or overkill, ala Shotguns). This is useful because for one, I'm already planning on evading the enemies anyway, and for two, I can get their damage right up until that last HP before I play Followed. Typically I get +3 for the check for two resources. This is preferable over something like Streetwise because with Followed, you get an extra clue. Eavesdrop gives you no bonus and as others have pointed out, an unknowable difficulty test (though evade values seem generally lower on the whole but I could be wrong).

It's not like you aren't planning on fighting enemies or getting clues, and any worth their salt should have an ample cash flow to pay a measly 2 resources. Eavesdrop might be cheap but it's only good for characters with high , while Followed is good for any or build. Jenny, Preston, and Sefina can easily afford it, and Finn is the king at evading. Tony Morgan likes it because he does get a free engage/attack, and let's not forget that Followed does NOT provoke attacks of opportunity so he doesn't need to bother with an evasion. Skids is the only one I can see not wanting this because the man's always broke. If he's going to pay for something, it better be test-less like Scene of the Crime. As for off-class s who might like it, I could see Wendy, Leo, Mark, and maybe a jank Rex who could use it to grab 3 clues and then play "I've got a plan!" to deal the full 3 damage. It's not like he needs the bonus so it's really the extra clue and the protection from attacks of opportunity he's looking for.

But I digress. The question remains, why not just get the clues with your off class faction? You're correct, just do that. But Jenny, Preston, and Finn all either have a limited number of off class support, or they have more than enough cash to play this. Why bother with taking up Jenny's precious 5 off class cards or Streetwise when you're going to have to make the skill test anyways? Intel Report is great, but if you really want to maximize it, you're going to need an obscene amount of resources. That's fine, but it will hurt the bank eventually. Lockpicks are good, but this way you can carry a two handed weapon around and nab clues while you're mowing down enemies. Like I said, it's doing lots of good work for Sefina. If you're goal is to be a passivist, then this card isn't going to help you. To me, it's about equal with most of the other 2 cluing cards, most of which cost you 2 resources and/or require a skill test. Plus, I gotta say, it is pretty satisfying to beat these eldritch monsters into turning tail.

LaRoix · 1421
Hopefully trish, with an evasion-investigation focused statline and a rumored enemy-on-the-board-sideeffect ability will make this card shine — niklas1meyer · 1 8/12/20
Any time you're looking at the family of 2-clue events, I think you also need to consider Working a Hunch. It only grabs one, but its fast, so you can just spend the action on investigating if need be. Compared to Followed, it is only worth it if you A) need to grab 2 clues without provoking AoOs or B) need the int boost it provides. But the simple Working a Hunch also has basically no conditional elements unlike many of the other options. Rogue doesn't really lack for skill boost, so the 'not provoking AoOs' might be the most stand-out part of Followed. — Death by Chocolate · 627 8/12/20
Nice evaluation and consideration of what this card can bring vs. off-class alternatives for Rogues... I find it easy to forget that evaluation sometimes of "how is this better than what I already have available". It seems like it would pull some good weight on an offensive Finn & Jenny who have other plans for their shoestring-budget of off-class cards, or an Ornate Bow Wendy.. — HanoverFist · 309 8/12/20
I suspect Trish to like it, but the one thing about the card that makes it lean into a combat build rather than evasion is that protection from AoO. Good point on Working a Hunch, I added it back in because you're right, I forget it saves you the action so you could just take a basic investigate for your second. And thanks, glad you liked the write up! — LaRoix · 1421 8/12/20
5

This card appears to be an apology to rogues for the insult to their intelligence that was Eavesdrop. For the most part, rogues have had a harder time picking up multiple clues with a single action than other classes -- and Eavesdrop joined Intel Report as a means of correcting that. But it's an extremely situational card, requiring you to be at a location with clues AND an unengaged enemy. And even then, you're pitting your likely average Lore against the enemy's evade value without a boost.

This card is a quite a bit better. You still need an enemy at your location, but now that enemy can be in any condition -- aloof, exhausted, engaged with you, engaged with someone else. And it gives you a handy boost to your Lore as well if the enemy is damaged. It's easy to imagine a turn in which you need two actions to dispatch a 3-health monster. You could squeeze "Followed" between those actions, and give yourself a +2 to your investigate. Or, you hang out with your guardian while she's whaling on something fierce, and benefit from her toils.

This card isn't quite the equal of Scene of the Crime, Read the Signs, "Look what I found!", or Deduction -- other class's tools for multi-cluevering. Even among Rogue cards, Intel Report is probably better -- especially for well-heeled rogues like Jenny and Preston. But it's decent. For rogues with seeker aspirations, it's a worthy inclusion.

Mordenlordgrandison · 281
Eh, I actually think this is a fair bit worse than Eavesdrop. It’s more expensive, and Eavesdrop more easily fits in Rogue decks that care about evading and investigating, which is more common that Rogue decks that care about fighting and investigating. The boost is... there, sometimes, maybe. But if I’m engaged with an enemy I would say investigating is not a high priority in that moment. Scene of the Crime is an exception since the clues are testless, but wasting an action you could have used to deal with an enemy to fail an investigate test is an incredibly bad play. — StyxTBeuford · 12385 12/23/19
It's a fair point, StyxBeuford. If you're going to evade that monster anyway, Eavesdrop is nice to have. But even in that case, Followed only costs one more (seems like a crapshoot whether the shroud value or the enemy's evade will be higher). But Followed works in other situations, too. In multiplayer, monsters are going to be frequently engaged with your friends. If you're running Eavesdrop, you'll have to hope your likely non-rogue friends evade that monster so you can come in take a listen. Or you spend two actions to engage and then evade it yourself -- horribly inefficient. Followed grants you much flexibility and a possible skill boost for only a slight price increase. — Mordenlordgrandison · 281 12/23/19
I tend to agree with StyxTBeuford that Eavesdrop is the better of the two cards. Like it's a very niche card, but it does have a niche. If you're Finn and set up to evade more or less everything you encounter, you can use Eavesdrop to reasonable effect. Eavesdropping on bosses , for instance , is more viable than you might think. Extracurricular Activity , Curtain Call, The Untamed Wilds and The Witching Hour all have enemies that you may not want or be able to kill when they spawn, but that you might want to investigate around. Eavesdrop can do that. It also isn't an investigate action , so it circumvents restrictions on that. But Followed, I can't really see a niche for. If you're a Rogue and mostly fighting , you're Tony (or maybe Skids or Jenny) and Scene of the Crime is the card you want. If you're not, you're evading and Eavesdrop has all of the benefits of this card with none of the risk of getting stuck engaged with something you couldn't finish off because you spent your turn investigating. So , I don't really see what this card is for :( — bee123 · 24 12/24/19
Granted, Followed is easier to get working in multiplayer, but it’s still a lot of circumstances to fit together just to get two clues. Eavesdrop isn’t particularly good either, but it at least makes sense for Finn or maybe Skids. Followed at best fits with Tony and even for him the icons are quite bad if the card isn’t useful to him in the moment. — StyxTBeuford · 12385 12/24/19
I think Followed is designed to be used in Tony decks -- with his middling Intellect, he appreciates any extra intellect boosts, and Tony's extra action can be what you need to use Followed while engaged with an enemy before finishing off the same enemy on the same turn. I agree that it is niche though. Besides Tony, I think Jenny is the only investigator that might like Followed -- as mentioned by others, Skids/Finn likely prefer Eavesdrop and Finn himself also has better off-class options (e.g. Winging It or Deduction). — iceysnowman · 147 12/24/19
And the thing is Tony is plenty good at investigating without it, especially with Crystallizer. I would not want it in most of the Tony decks I’ve made- too specific and not really powerful enough to justify. — StyxTBeuford · 12385 12/25/19
1

Mark Harrigan able to use it because it's tactic card too. When use along with Evidence! after defeat it. He got 3 clues as total.

Also you can youe Scene of the Crime before this card to get 4 clues instead.

However, it initiated the test so you can use Double or Nothing to get 4 clue if success too. That can use Momentum to make it really easy.