Revelation - Put this card into play in your threat area, with 3 horror on it. It cannot leave play while it has 1 or more horror on it.

While it is in play, treat each you reveal on a chaos token as a , , and (resolve all three).

: Move 1 horror from this card to Daisy Walker. Then, if The Necronomicon has no horror on it, discard it. 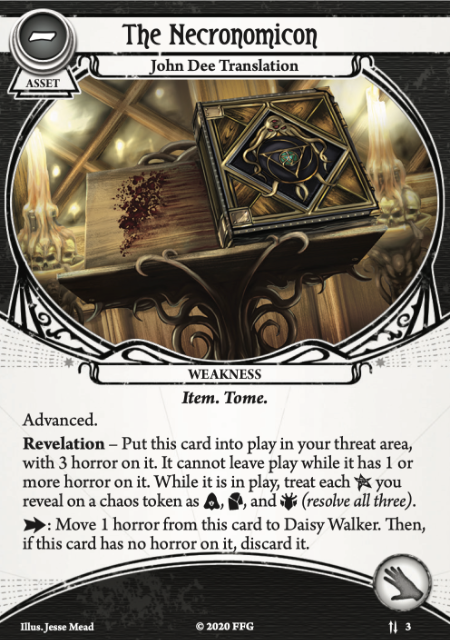 The Black Cat can negate 2 of the 3 symbols 3 times, for when you really don't want to pull tablets and elder things and catastrophically fail - you'll even have a decent chance of passing the test.

As far as weakness mitigation goes, this is rather XP expensive as Daisy's elder sign effects are quite good and don't need replacement; though the cat's soak is better than anything else she can get in faction.

2 questions about this version of necronomicon.

ks4108 · 5
It's a single chaos token with three symbols. Voice of Ra cares about symbols, so you get 6 out of it. Counterspell cancels a token, so you it cancels the whole thing. — Adny · 1 4/7/21
Voice of Ra states: "For each... symbol revealed, gain an additional 2 resources." This would lead me to believe that one would gain 6 resources because (per Adny's comments) the single token has three symbols. Critically, the Necronomicon states that the three symbols apply when a token is revealed, not only resolved, so it should apply to Voice of Ra and other reveal mechanics. — SocialPsientist · 138 4/7/21
1.6 resources — Pawiu14 · 123 4/8/21
2.Of 1 icon token of your choice — Pawiu14 · 123 4/8/21
...why is it a single chaos token with three symbols, as opposed to the more natural interpretation of treating as though you revealed three chaos tokens simultaenously? — suika · 8839 4/9/21
Because it's literally, physically, a single chaos token. This means, by the way, that Counterspell (2) treats this tri-symbol token differently than Defiance (0) does. Counterspell says to cancel the entire token, so you cancel the entire token and you haven't drawn a token for that test. Defiance says to ignore the effects of the chosen symbol, so you ignore those effects and still resolve the rest of the token. — Thatwasademo · 44 4/9/21
If it's a tri-symbol token, could you cancel it with counterspell? Technically, counterspell specifically cancels a skull/cultist/tablet/elder-thing chaos token, not a chaos token with a skull/cultist/tablet/elder-thing symbol. — suika · 8839 4/10/21
The definition of "skull/cultist/tablet/elder-thing chaos token" *is* "chaos token with a skull/cultist/tablet/elder-thing symbol" (respectively). — Yenreb · 15 4/12/21
Would it defined as a token with that symbol on it, or a token with only that symbol on it? The latter interpretation would mean Counterspell (2) can't target a tri-symbol token. — suika · 8839 4/13/21