Spend 1 ammo: Fight. If the attacked enemy is exhausted, you get +2 and deal +1 damage for this attack.

After you evade an enemy at your location: Perform the above Fight ability without spending an action.

Mauro Dal Bo
Into the Maelstrom #305. 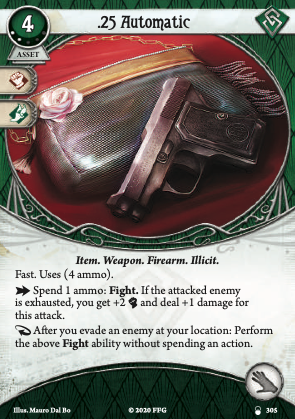 There's not much to say about this thing. It's great for high- characters or characters who lean into it. It's a little too inaccurate to use if your is less than 3, but for "Skids" O'Toole or Winifred Habbamock it's perfect.

Saving actions is a useful mechanic, the .25 Automatic is fast already, so that's a saved action, the free attack on the evade is also good, another saved action. But wait. Is it? The action to evade is still an action, so if youre attacking the enemy, just with evade actions instead of attacks, what's the point?

Here's the point: Speed and safety. Layering the attack onto evades means that you get a double layer of defense, the attack may fail, but the enemy is still evaded, alternatively a tough opponent might survive one attack, but it's not in your way anymore so you can either leisurely finish it or keep moving, safe in the knowledge that when the enemy gets in your way again later, it's prepped for faster killing. Against a boss that you need to work through in more then one round, the initial evade attempt isn't a "wasted" action, not to mention the circumvented Retaliate. Also, dont forget, if the attack actually fails, and you find yourself in trouble, the enemy being evaded gives you an escape route.

Here's another thing. If you're experienced as an character, you should be familiar with those moments when youre stuck evading 2+ enemies who've swarmed you, the .25 Automatic is'nt target-locked onto just the newly evaded guy, you can evade 3 different enemies in a round, and shoot whichever one you want dead with all 3 bullets.

In short, this weapon is by itself not the greatest gun in the world, but for an character, the sheer amount of tricks it unlocks is staggering.

The one downside is if you evade an disengage an aloof enemy you can't trigger the reaction on that enemy. So far this has been very annoying in Death's Doorstep and Secret Name, so maybe avoid this in TCU, especially if going with the Lodge.

My problem with this weapon is no investigator makes great use of it because all rogues have low strength. 3 strength +2 only gets you to 5 (Wini, Skids, Jenny, Finn). That's not enough to hit anything above normal difficulty.

Even with +1 from something else you're really going to struggle with a mid level enemy still. Wasting those bullets is going to really hurt because while this is fast, it's still pretty expensive at 4.

I guess at best its used to hit a low strength, low threat enemy as a secondary fighter but then why would you evade it first (to make use of the free shot reaction ability)?

Tony doesn't need this either of course with his poor evade.

fates · 18
It's true that it's hard to use 25 automatic without any supporting card. Nevertheless, many supporting cards exist: Sharpshooter, commiting lots of cards (wini?), Well Connected with big money deck, Hard Knocks. — elkeinkrad · 336 4/18/22
Rogue as a class is all about finding ways to utilize their great payoffs on their cards despite their low consistency. This generally means either cycling skill commits fueled by lucky cig case or pump assets using their absurd economy. Rogues aren't like guardians or mystics where they expect to passively pass combat tests by using weapons with giant modifiers, they require more finesse! — dezzmont · 128 4/18/22
5 is pretty good, you know. Most Guardians with Machete only fight at 5. It's unfair to discount this weapon on the grounds that it "only" reaches 5 - there are plenty of ways to boost this further. Delilah O'Rourke exists and perfectly synergizes with this style of evade+fight Rogue. You can commit skills and then benefit from the oversuccess with your LCC. You can leverage the Rogue resource economy to pay for boosts. And even if the attack does whiff, it was a free action from an evasion you were probably going to do regardless. Being able to shoot without spending an action after evading is great action economy if you wanted to evade anyway for Delilah, Pickpocketing (2), etc. It's a solid Finn card if you want to build him in a more fighty or flex role; Lockpicks in one hand and .25 in the other with Delilah O'Rourke as backup. — Soul_Turtle · 88 4/18/22
Beside Finn Trishs ability can also trigger the reaction if you choose to evade an enemy. This also works with breaking and entering. And with this weapon the skill hatchet man becomes a rouges vicious blow. And in the end even payday gives you an additional resource. — Tharzax · 1 4/19/22
I don't think Pay Day gives an additional resource for this. It's just performing the Fight ability, but not spending an action to do so. — snacc · 801 4/19/22
I would say it triggers because of the bolt action designator fight. According to the rulebook you perform a modified fight action. — Tharzax · 1 4/19/22
@Tharzax Pay day explicitly states "for each action you have performed this turn". 25 Automatic says "perform the above Fight ability without spending an action". Seems pretty clear to me. — snacc · 801 4/20/22
Look up the card page for Eon Chart, because it has some good discussions on this topic. Fundamentally Actions are different to Abilities, although they are often and easily confused. — snacc · 801 4/20/22
Better look in the discussions of shortcut and it's upgrade for the interaction with frozen in fear. And yes spending actions is not the same as taking them, but for me the ability tell me to perform a modified fight action. — Tharzax · 1 4/20/22
There is no mention of Frozen in Fear in either of the Shortcut pages, so I'm really not sure what you're referring to. — snacc · 801 4/20/22
The ability does not tell you to "perform a modified fight action". It literally says right there on the card "perform the above fight *ability* without spending an action". Ultimately it's your game and you can play it as incorrectly as you want to. — snacc · 801 4/20/22
Just look into the rule referencebook for the description of bolt action designators: https://arkhamdb.com/rules#Action_Designators — Tharzax · 1 4/20/22
@Soul_Turtle. 5 is an awful attack stat on hard+expert. Most worthwhile enemies have 3-5 strength. So you're at best 2 over. You'll get screwed over by the extremely common -3, -4, -5 tokens and probably get with a failure penalty on special tokens. You can't compare it to Machete which has unlimited uses and costs less resources. If the attack misses, you waste 1 ammo/resource. Guardians also frequently boost their strength, but Rogues don't often. You can commit more to a test or factor in some synergy but thats just more resources to make a mediocre card slightly better and you could say that about any card. You could instead take a great card and make it even better in that case. — fates · 18 4/24/22
@Tharzax A discussion here includes a quote directly from the game designer, MJ Newman: https://ffg-forum-archive.entropicdreams.com/topic/301629-what-counts-as-a-performed-action-and-what-doesnt/ — snacc · 801 5/5/22
@Tharzax "... activating an ability with an action designator 'performs the designated action as described in the rules, but modified in the manner described by the ability.' In this case, the modification is the fact that it is no longer an action , but is a free triggered ability ...". This is MJ Newman's direct response to this question. If you do not spend an action, then it is not considered an action. Therefore no synergy with Pay Day or Haste etc. I hope that clears things up for you. — snacc · 801 5/5/22
1

I think this would be a lot of fun with Trish and enchant weapon. It’s XP heavy, and costs a lot, but every turn it’s out, you can turn a clue into an evade AND an attack. Winnifred can also have a lot of fun with pickpocketing(2), and since both cards are fast, she can set them up as soon as she needs them. What’s in your pocket? Bullets? It was bullets.