Engage any number of enemies at your location. For each enemy engaged this way, deal it 1 damage and draw 1 card.

You steel your nerves and shout into the darkness. "Come and get me!"
John Pacer
Nathaniel Cho #30. 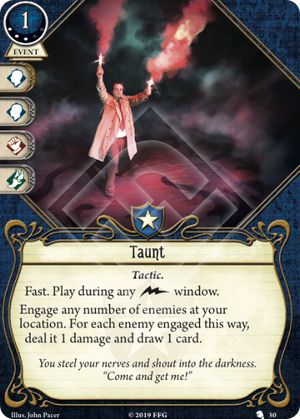 We don't talk how ridiculously good this card would work in the Dream eaters cycle. You have two swarming (3) enemies at a location? How about dealing 6 damages and drawing 6 cards for 1 resource and without action? Such situation isn't so hard to imagine after all. I won't even talk about the action compresion.And the more players, the more powerful this card can be. This should be considered as warcrime against the dream-people.

Drostt · 4
Yeah this looks pretty busted in Dream Eaters. Nuff said. — SGPrometheus · 255 9/1/20
I wonder now if this actually works the way we think: don't swarm enemies engage as a single unit? So do you only get 1 card and 1 damage no matter how many swarm cards there are? — SGPrometheus · 255 9/1/20
SGPrometheus is correct, the example from the swarm rules makes it clear, only 1 damage: (For example, if a host enemy or any of its swarm cards are evaded, all of them exhaust and become disengaged.) — Django · 2800 9/1/20
That's true if you evade one of them, but in this case couldn't you still target as many of them as you want? If not maybe that has implications for Zoey's ability, or Rita's ability (after an Elder Sign pull) comboed with Survival Instinct. Seemed like most people were saying that Zoey gets 1 resource / swarm, and Rita could ping each enemy after using Survival Instinct (which evades all engaged enemies). — Zinjanthropus · 93 9/2/20
Yeah, I think Zoey's only supposed to get 1 resource, no matter how many swarm cards are under the host card. Likewise Taunt can only deal 1 damage and draw 1 card no matter how many swarm cards are under the host. The rules specify that swarm cards are individual enemies under MOST conditions, not all. One of the conditions under which they're not considered separate enemies is while engaging. I'm pretty sure. — SGPrometheus · 255 9/2/20
if you click on "rules" here on arkhamDB, search for swarm, you'll find the following rule where i copied above example from. I guess i was expecting too much of people to look up the rules themself. It clearly states that the example also applies to "engage": The host enemy and all of its swarm cards move, engage, and exhaust as a single entity. — Django · 2800 9/3/20
That's right, though there are some nuances that are unclear at first glance. Yeah they engage as one enemy, but you became engaged with x+1 enemies as in rules: "if an investigator is engaged with a host enemy with 2 swarm cards underneath it, that investigator is engaged with 3 enemies in total". And has two lines: first says about engaging enemies, second one about dealing damages and drawing cards. After engagement action resolves, you count the enemies that became engaged, and now there is x+1 enemies engaged with you. But well yeah, after deeper consideration, you need to count enemies that were "engaged this way", so there was only one such enemy. — Drostt · 4 9/22/20
0

How would others interpret this card working with Nathaniel Cho's special ability: "When you deal damage to an enemy by an event or a fight ability on an event: Deal 1 additional damage. (Limit once per phase.)"