Cancel all attacks made by non-Elite enemies against you this phase. 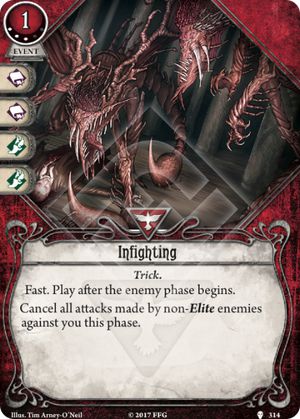 Baffling card, it's literally so bad that words can barely describe it. It's barely useful even if it were a 0-xp card, much less 3!!

So, what does it do exactly? It:

For this to be useful, there needs to be an enemy phase where enemies are going to attack you, an unideal circumstance to start with, if there is a non-hunter enemy attacking you that means that you've gone a full round engaged with an enemy, failing to deal with it or ignoring it wholly, or ended your round for some reason with a ready enemy. The other case is if a hunter catches you, this might be more probable but still not ideal or common by any means (Not that hunters are uncommon, but the usual response to a nearby hunter is to go and deal with it, not stick around and wait for it!)

There is another card that harkens to this one, On the Lam, seing how this strength operates and gives you total freedom for a round sorta displays what they were thinking for Infighting, it's just not nearly as useful!

The biggest issue with Infighting is that its a niche card that does nothing but ease the pressure off you a LITTLE, but only when you're completely drowning in trouble. The non elite text is the real dealbreaker here because it's during battle with Elites where this particular effect would be good (or rather, the time where youre most likely to drown in enemies), Infighting is basically a fancy Dodge, in fact I think 3 Xp is just right an amount of XP to turn Dodge into an "AoE" effect, but it isn't, and it's just terrible.

P.S Oh, just to be fair, at least it has pretty great icons. Most of the time it'll be a 3-xp Unexpected courage with some rarely helpful text on it. I quite often use Eucatastrophe for the icons rather then text so i'm not kidding when I say that sometimes an Unexpected Courage with extra text on it is perfectly reasonable. Infighting is not one of those cases.

I think this might be quite good on Daniela Reyes! Since her ability works even when the attacks are cancelled, you could play this when engaged with a bunch of enemies, they deal no damage to you but you still deal 1 damage or evade them.

Typhen · 4
Sure, but if you're engaged with bunch of monsters, what do you do on your turn? Fight the monsters. And what if you can't deal with the monsters? Well then your deck has bigger problems that this one card won't be able to fix. — Nenananas · 214 3/7/22
2

That make a lot of disadvantages. I can see some build with William Yorick and Taunt, but is it really worth it?

MoiMagnus · 62
Most new and upgrade survivor cards are crap compared to other classes. I think playing a survivor or a whole group of them is like inofficial new difficulty level. — Django · 4192 4/6/18
If this said "Fast. Play this after the investigator phase begins" And changed "...this phase." to "...this round." then it would be worth including. — CecilAlucardX · 9 4/6/18
2

Daniela Reyes plus this and some recursion in Dream Eaters = chef's kiss.

Guess I gotta write at least 200 characters worth of words. How's your day going? Mine's decent--I've got a hankering for some nachos.

Seems too situational and expensive to be worthwhile. The icons are good, but I don't think I would pay for this in any deck.

It is usually a worse dodge... keep that in mind.

It might get better in a scenario with a crapton of enemies.

Until then, skip this.

Myriad · 1136
A worse Dodge (and I’d agree with that assessment) for 3 XP is pretty rough. The Survivor XP cards not named Peter or Will to Survive continue to disappoint. — CaiusDrewart · 2732 3/27/18
Can this be good? Are the icons good enough to warrant an include in some decks? For 3xp, I doubt it. I can't imagine a survivor deck where your aim is to engage as many enemies as possible, which is where this would really shine. Obviously in solo it's extra bad, but even in multiplayer it's uncommon to see multiple enemies, let alone in one location, let alone being engaged by the survivor. — SGPrometheus · 640 3/27/18
0

Basically a version of On the Lam for all Survivors(and not covering the enemy phase). Which isn't the most impressive card in my opinion, and I could easily see this being cheaper on exp. Allows you to drag enemies engaged with you around the map or ignoring them while you do other things on your location. This is a very niche effect so the only question is why.

At least it got nice double pips baa . If you buy it for the pips, check if you don't want Hyperawareness (2) instead.

This card gets panned for good reason. It costs a lot for something that other cards already do at level 0. However, with the Vengeance mechanic in the Forgotten Age, it will be interesting to see if this card moves up in priority at all. It's one that I would keep an eye on for now, to see if it ever makes it into someone's deck.