Mythos
Agenda. Stage 3
Doom: 8. Clues: –
...that leering, tittering shantak coursed on impetuous and relentless, flapping its great slippery wings in malignant joy, and headed for those unhallowed pits whither no dreams reach...
– H. P. Lovecraft, The Dream-Quest of Unknown Kadath 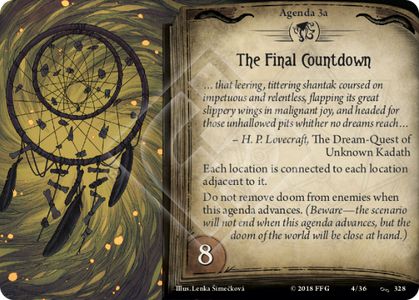 The lead investigator must search the encounter deck and discard pile for a copy of Daemonic Piping and draw it.

There is no longer an agenda deck, but the scenario is not over. Until the end of the scenario, doom that would be placed on the current agenda is instead placed on Azathoth, and all doom in play is considered to be on Azathoth.

You come across another circle of Azathoth's worshippers, led by a hooded, shapeless form which holds an ancient lantern high above its head. The lantern's dim grey light scarcely pierces the realm's darkness. Somehow, the phantom is familiar to you; some vague sense of kinship drives you onward.

Check Campaign Log. If Corn Husk Doll is listed under "Mementos Discovered," the creature recognizes you, as well. It peers at you curiously, and the circle of prayer is silenced; remove 1 doom from Azathoth. Otherwise, the creature barely notices you, and the circle resumes its chanting. 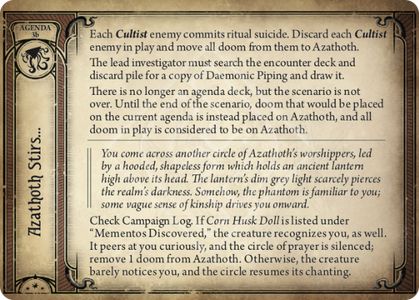