Mythos
Act. Stage 1
Clues: 1.
From the horizonless breach in the gaping maw of the sky, you have traveled an impossible distance, and yet you are still many leagues from the nighted throne where Azathoth stirs.

Spend X clues: Draw the top X cards of the Cosmos. Choose one to put into play using its "Cosmos -" instructions, and move to it. Shuffle the rest back into the Cosmos.

Objective - Only investigators at Hideous Palace may spend the requisite number of clues, as a group, to advance. (Beware - any investigator who is not there will be killed.) 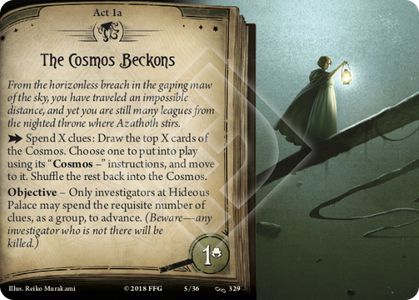 Palace of the Old Ones - Back

Act
Your steed carries you through the entryway of the nightmarish palace, and you are surprised to find the halls inside to be as vast and cavernous as the empty space surrounding it. It is as though the doorway was but the threshold of another universe, as desolate and boundless as the last.

Take the set-aside Court of the Great Old Ones and the top 2 cards of the Cosmos, and shuffle them so you cannot tell which is which. Then, put them into play along with empty space, as depicted in "Location Placement for Act 2" in the Campaign Guide.

In player order, each investigator draws the top card of the encounter deck. 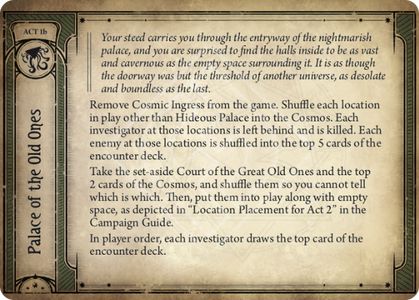