Mythos
Act. Stage 2
Clues: 2.
Your bones shiver violently with the silent, still cold of this empty place. No light penetrates these black halls. No warmth reaches you, no breeze touches your skin. This must be what death feels like, you think morbidly.

Spend X clues: Draw the top X cards of the Cosmos. Choose one to put into play using its "Cosmos -" instructions, and move to it. Shuffle the rest back into the Cosmos.

Objective - Only investigators at Court of the Great Old Ones may spend the requisite number of clues, as a group, to advance. (Beware - any investigator who is not there will be killed.) 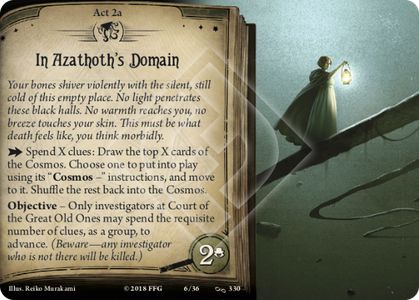 Nucleaus of the Universe - Back

Act
The winged creature lands on a winding walkway of black stone, extending into a ceaseless horizon of pitched void. It takes some prodding and encouragement before your steed continues onward. Even the most dreadful of beasts are terrified of this place, it seems. Yet still, you can hear the mindless chanting of those who dwell closest to the daemon-sultan, the maddening whining of the pipers, the monotonous drum-beats which thrum endlessly in your mind...

Take the set-aside The Black Throne and the top 3 cards of the Cosmos, and shuffle them so you cannot tell which is which. Then, put them into play along with empty space, as depicted in "Location Placement for Act 3" in the Campaign Guide.

In player order, each investigator draws the top card of the encounter deck. 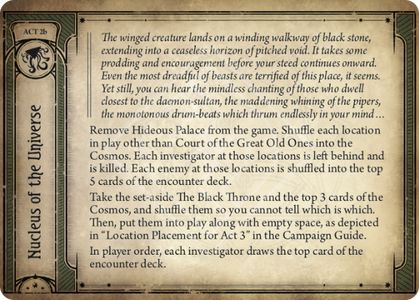