Revelation - Secretly add this card to your hand.

You cannot play cards or trigger abilities on player cards with an odd printed resource cost. 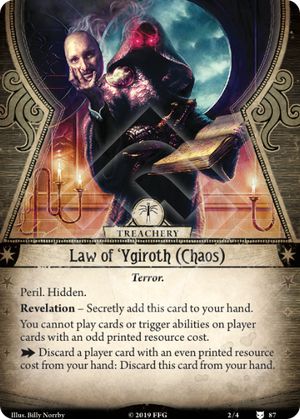 This set of cards are in the running for "Most Annoying Treacheries in the Game." Sure there are cards that will kill you faster (e.g. Rotting Remains), wreck your entire scenario if you have low , (e.g. Frozen in Fear), kill off your allies (e.g. Centuries of Secrets), but these damn Laws always cause me to exclaim "Not this bullshit again!" which my play partner immediately understands, then we both realize that I have violated the Hidden rules, and it's all bad.

More seriously, there are three possible scenarios for each:

Meanwhile, you are constantly checking the unreasonable rules to remind yourself what you can't do, which just adds insult to injury. So, not the objectively worst thing the Encounter Deck can throw at you but a very unwelcome guest nevertheless.

LivefromBenefitSt · 742
I fully agree. The treacheries in TDE A are my least favorite in the game, and this set is one of the major reasons why. — StyxTBeuford · 12523 10/10/20
I should have added that, once you clear one, you have an approximately 65% chance of drawing another the next turn, rising to 95% if the deck has reshuffled. These may be the lightest cards in the Encounter Deck, floating to the top like stinging jellyfish. — LivefromBenefitSt · 742 10/10/20
Yeah, Laws of 'Ygiroth are annoying AF. — Zinjanthropus · 170 10/10/20
@LivefromBenefitSt Ancient Evils is lighter. My play group routinely sees all three copies after only two rounds. — SGPrometheus · 563 10/13/20
I just encountered (ha) this set while testing a solo Silas deck that happens to have just *one* card in the whole deck with even printed cost (the harpoon), and only three even number of skill icon cards. So yeah, this set pretty much shuts down my whole deck with no way out of it; not fun at all. I understand the idea of building your deck to mitigate encounter deck impact if you have low will, sanity or whatever, but this even-odd gimmick seems arbitrary and overall quite absurd to me. — bnvt · 5 7/28/21