Search the chaos bag for X tokens and return them to the token pool. X is the number of tokens in the chaos bag. Gain 1 resource for each token removed in this way.

Even the skeins of fate can be untangled, for a time.
Adam S. Doyle
A Light in the Fog #230. 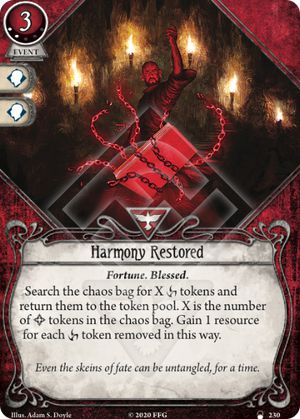 This might seem like a profit center for a continually broke Mateo, but the three cost can be a nonstarter sometimes. If your team is running heavy blessings, it can be hard to restructure into curses; this card is for those who love the benefits of curses and are already putting plenty of blesses in. As a money maker, this will require six of each to be as good as an emergency cache. Think of it as bag manipulation and you’ll be much better off. Preston can afford it easily, tho.

MrGoldbee · 1080
six of each to be as good as an emergency cash...if removing curses from the bag holds no value, if you remove six curses from the bag with this card (double tempt fate followed by harmony) you will be laughing that this card is ALSO an emergency cash. I think most of the time this card will print 1/2 money and still be more than worth it. (lets not even consider tempt fate*3 on the opening turn of a game followed by harmony) — Zerogrim · 190 2/19/21
0

Can't search for 4 tokens since there are only 3 in the bag - does this mean that you'd not be able to play Harmony Restored?

Is there an official ruling on this? or am I completely reading it wrong to begin with?

unremb · 194
I believe there's a general rule about completing as much of an effect as possible, like when you still lose resources if something says "lose three resources" but you only have two. That's how I'd play it. — SGPrometheus · 554 4/28/21
Right, because the removal is an effect rather than a cost, you don't need to be able to carry it out in full, provided you can carry out enough of it to alter the game state. "When a non-targeting effect attempts to interact with a number of entities (such as "draw 3 cards" or "search the top 5 cards of your deck") that exceeds the number of entities that currently exist in the specified game area, the effect interacts with as many entities as possible." — Tamsk · 1 4/28/21
Good point! I had not thought of this, thanks for the clarification. — unremb · 194 4/28/21
This also happens to be why the last sentence is phrased the way it is, rather than "Gain X resources". It's possible you don't remove X curses and they wanted you to only gain as many resources as curses you actually removed. — Thatwasademo · 39 4/29/21
@ Thatwasademo: Not sure on this reasoning. There might be possible interactions with other or future cards, that potentially could remove additional Curse tokens while resolving this card. They might as well just want to make sure, that you don't get extra cash for them in that case. But regardless, SGPrometheus and Tamsk said it all. — Susumu · 150 4/29/21
No, the wording is most assuredly to account for the entirely likely situation where there are more Bless tokens than Curse tokens in the bag. Example: there are 5 Bless and 3 Curse tokens. This X=5 and you try to find and remove 5 tokens. You remove as many as you can but it is only 3, so you gain 3 resources. — Death by Chocolate · 815 5/3/21