Spend 1 ammo: Fight. You deal +1 damage for this attack.

Mauro Dal Bo
Return to the Path to Carcosa #1. 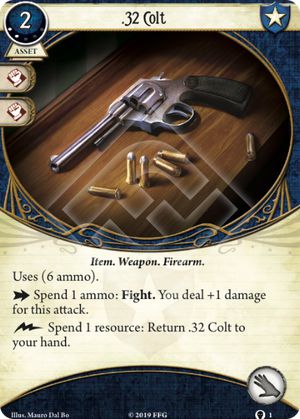 The lower cost and ability to reload are pretty great, as are the two skill icons. Combos beautifully with Well Prepared and the Bandolier, ensuring that you don't waste your Shotgun or M1918 BAR rounds on weaker enemies.

So one deck I've tried to get of the ground for a while now is Cho with boxing gloves and a weapon, bandolier style, My logic was always that cho often runs out of steam given each card in his deck basically only kills one enemy, adding a gun (or other reliable weapon) would give much more gas, the issue I always run into is this:

A) If I keep the gun in play I lose out on the efficiency of getting draws when I kill.

B) If I play the boxing gloves (without waiting for bandolier) I lose three bullets that my deck has no way of getting back and sacrifice total killing power.

Now my collection has the colt (2), unlimited bullets on a card that can return to hand at any time, I think it solves both issues instantly to the point of probably just not bothering with bandolier at all.

And this probably works with any two handed big weapon, play the colt as soon as you can, when you need to play your big "thingie" you just bounce the colt, then you wait till you run out of ammo/spirit cards in your deck and just replay it.

what if you get near the game and you aren't out of spirit cards/ammo, well then, this card just became an overpower, and that's the worst it can ever be, which to me seems like a bargain for a card subclass characters can take.

Zerogrim · 190
The Cho running out of steam problem is one that I've heard of often, but I've never experienced it in my own runs as Natcho. If basically every card in your deck is a cantrip, a spirit, or an asset, he ends up in a state where every card in his deck is a cantrip or a spirit, and thus will never run out. — suika · 7725 3/27/21
If you are gonna run Cho with Bandolier, may as well go all in and run him with Bandolier 2 and 2 sets of boxing gloves :-P when you get 9 fight while fighting and 2 tutors per enemy killed :-P — NarkasisBroon · 1 3/27/21
Man, I legit forgot this cards exists. It's definitely interesting, but it suffers from the same issues that many level 1-3 weapons do: mid-range weapons are a luxury that most decks can't afford. As far as Cho with bandolier, I usually pick survival knife as my third weapon. Upgrading that to level 2 feels a lot more valuable to me than upgrading this. — SGPrometheus · 554 3/27/21
It's really clever to combine this with Boxing Gloves/Bandolier as it gets around a significant weakness of this card, namely its lack of Combat bonus (pretty bad for an XP weapon.) But I have to think it would be better just to run a stronger weapon alongside them. — CaiusDrewart · 2438 3/27/21
I'm just not big on spending overall 5 resources (or 8 if the scenario goes that long) for what amounts to a less risky Knuckleduster. Granted, they're not upfront, which is a big deal, but still. I think the og Colt is a fine choice in high commit decks, but I don't see myself upgrading to this over Machete if I am going to take a mid-XP weapon. — StyxTBeuford · 12491 3/28/21
again, I think every single post misses the point, if you run colt (2) you don't need bandolier at all, so if your so dead set on comparing it to other card that don't do the same thing then compare it to bandolier. — Zerogrim · 190 3/28/21
I’m mostly comparing it to melee weapons because that’s kind of how I think of both versions of Colt, as it’s a lot of uses but with a small boost. — StyxTBeuford · 12491 3/29/21