"I am the wisest man alive, for I know one thing, and that is that I know nothing."
- Plato, The Republic
Andreas Zafiratos
Return to the Path to Carcosa #3. 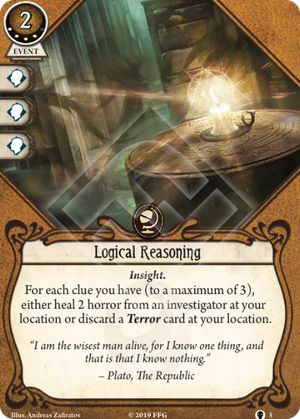 This seems like a great upgrade for multiplayer Carcosa campaigns, especially as run by Carolyn Fern...get 3 clues first, have everyone else join you on your space, then one action and 2 measly resources from you, and everyone on the square gets healing and resources. Using this early in Dim Carcosa in particular would really help.

Too bad you can't discard Dissonant Voices with this. Yeah, I know, you could do it on somebody else, but not on yourself. Bummer.

Where it would be great, though, is with Farsight. Healing damage and horror is usually a hard sell because of all the actions it costs you...but a FAST heal of up to 6 horror among the whole team? Yes, please!

I have two questions about this card:

or do i have to choose only 1 effect and stick with that for all the clues i have?

Rosco · 1
Yes, you can split the effects, that's why it says "for each clue you have" — Sassenach · 152 10/3/19
That could just be referring to the number of times you can perform a single action. "do it 3 times (i.e.)". It's not clear about the split. Since is a relatively new card (return to carcosa) i suppose there's no FAQ about this right? — Rosco · 1 10/4/19
Since it’s ‘for each clue, either’ you can split the effects as per your second bullet point. Re: your first ‘heal 2 from an investigator’ clear states ‘an’ then it’s pretty clear it can’t be split further. I could also interpret it as only being able to clear horror from one investigator total, but I think it’s intended to be read as ‘pick an investigator for each heal 2 chain.’ — Death by Chocolate · 1021 10/4/19
If Carolyn Fern plays this card, for 3 clues/effects, and is targeting the same investigator (ex: Agnes): does Agnes therefore gain 3 resources from Carolyn's ability because each 1 clue = 2 horror are separate effects? — VanyelAshke · 157 11/15/20
@VanyelAshke I would say yes. If you review the FAQ on Carolyn's page, I believe it's helpful to see the clarification the Liquid Courage doesn't give extra resources because it's "additional" instead of a second instance of healing. In this case, the card does not say "heal 2 additional horror for each clue (up to a maximum of 3)." — Time4Tiddy · 184 12/4/20
@Time4Tiddy I'm really late, but I'm fairly certain that's not the case. Terrible Secret is a card that is worded similarly ("For each card underneath Diana, you must either discard that card or take 1 horror"), however we've already got a ruling for that saying that the horror is considered cumulative and that's why using Deny Existence cancels all horror dealt by it. Given how similar the wording is on Logical Reasoning it probably works the same way and so would be considered only one instance of healing if you dump them all on one target. — Lasiace · 13 9/22/21
Sorry, correction, Deny Existence ignores all horror, not cancels. — Lasiace · 13 9/22/21