Revelation - Put Dissonant Voices into play in your threat area.

You cannot play assets or events.

Forced - At the end of the round: Discard Dissonant Voices. 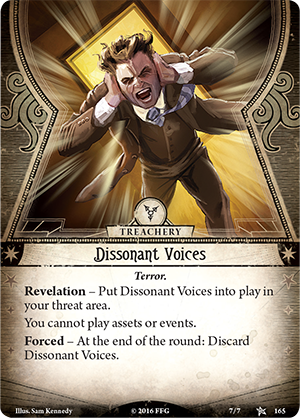 The card says you cannot play assets of events. The rulebook states that playing a card is to pay its resource cost and put the card into play, usually using a play action.

Thus, cards already in play are unaffected. You can also commit cards from hand to skill checks.

jimavet · 9
If I understand it correctly, this prevents you from playing Dark Memory as Agnes, so if you're unfortunate enough to draw it with DIssonant Voices in your threat area, you are forced to take 2 horror. — Jelonek · 1 10/18/21
1

To me, this card brings up an interesting question: is an encounter card balanced if it punishes certain playstyles disproportionately? For example, is The Tower • XVI unbalanced because of how severely it punishes skill-reliant investigators like Silas Marsh and Minh Thi Phan? Or, in the case of Dissonant Voices, is it unbalanced if it shuts down investigators that are reliant on playing events, like Nathaniel Cho?

Of course, as others have said, Dissonant Voices isn't a complete shut down; Nathaniel Cho can still punch monsters or Sefina Rousseau can draw cards, for example. However, the gap between those investigators' effectiveness when Dissonant Voices isn't afflicting them and when it is concerns me, similar to how some investigators (like Charlie Kane) become mere shadows of themselves during The City of Archives. Not being allowed to play what you intended to play with little room for countering strikes me as potentially poor game design; the "Yes, but..." design of most of the game's counters to player strategy (i.e.; Final Rhapsody: Yes, you can turn s into 0s, but those s are also time bombs when you draw your signature weakness) looks more interesting, and, to be blunt, more fun, than flat denial like Dissonant Voices.

TL:DR; This new user drew back to back Dissonant Voices with Nathaniel Cho and got salty about it.

NightgauntTaxiService · 46
I think the most annoying experience I had involved a treachery from the Bishop's thralls encounter set and Tommy Muldoon. It just would not stop messing me up! But more generally , I think Dissonant Voices is on the right side of mechanically balanced for me because it goes away after a turn without you needing to do anything. That's a very short-term effect , so it should be fairly dramatic. And it won't be about every scenario, unlike signature weaknesses. There are a fair few cards that will stop, blank or remove it as well so your team-mates can help out if you know it's a problem. And it does teach you in the core set, that the game is sometimes gonna stop you pulling certain levers and it's good to have a back-up plan. But, yeah , 100% , it's boring. There's no problem to solve or choice to make here , beyond cancel it or wait it out. In a lot of ways , its the nearest thing AHLCG has to a "miss a turn" effect and no-one likes those :( — bee123 · 24 10/29/22