Before setting up each game, draw 3 random cards from the tarot deck and choose 1. Place the chosen card in front of you, in the upright position. Each other investigator ignores its effects. Shuffle the rest back into the tarot deck. 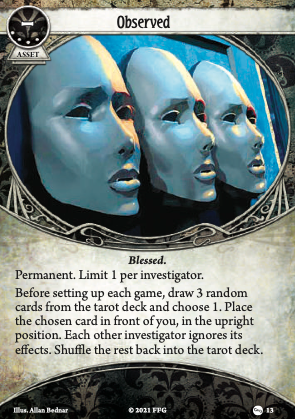 A new permanent, with a rather hefty XP cost attached. The effects you get are a fairly varied, but there are a lot of interesting options available. Since the tarot only affects you rather than the group, it means that the overall effect may be lower. I've listed these out for general groups:

There's some luck in the draw of the tarot deck. However, it's worth noting that you draw 3 cards and pick the best of them. What are the odds of getting something that's worth 4 XP each time? You won't get a great result targeting a specific effect - you'll only have a 13% chance of finding it each game. However, it's not too hard to get to a position that feels about right.

Where does the threshold for reliability lay? It varies for different people, but I'd set my own tastes at around 90% - that is, as long as I'd get something worthwhile or better in 9 out of 10 shots here, it's worth it. That threshold actually lays at around 11 cards. 11 cards leads to about an 89% chance of getting something from that set. And the odds only improve further if you like more than that.

I'd say that most characters wouldn't want this for health/sanity/healing, don't need to shuffle their discards into their decks, only want boosts in 2 stats, don't care about hand size, and don't worry about trauma unless things are going poorly. That would be indicate 8 out of 22 cards would be 'whiffs'. However, that's still better than the odds I've set for myself - it's only about 4% of the time that there are only effects available that are 'subpar'. And those effects aren't bad - just not quite worth that XP. On the whole, I'd estimate most of the 'poor' effects are worth it if ill-fitting, noting the implicit savings are notable since you don't have to spend any draws, plays, actions, slots, or resources to get the benefit.

4 XP is still a notable cost, and it seems unlikely that this will be one of your first purchases. However, once you have enough wiggle room to experiment and upgrades become more incremental, it's worth looking through the list of effects and seeing if enough tarots seem worthwhile enough to justify the cost.

Ruduen · 623
I don't know, how the rules are, if you take Tarots for all. Are they also drawn before setting up the game? Can you choose to do this before picking your private one? If so, you could possibly adress them, like taking a healing one, if you get positive or negative effects from (not) being defeted. But I suppose, this is not the case? However, I think, if I go for this card, I would rather take it early than later. The Permanent keyword is the main power of this card and several effects are more powerful than comparible 3 XP permanents. If you draw the +2 XP on not being defeated early (and pull it off), you actually don't really spend 4 XP, just 2, and delay the spending of the other 2 for a scenario or two. Also, the more scenarios you get the bonus, the more likely it gets, that you on times get something really exciting for your investigator. — Susumu · 165 6/28/21
Outside of these cards, the Tarot Deck is used as an optional variant. However, the official uses of them always occurs prior to any other mission setup (or in the campaign-long case, campaign setup). If you're using the per-mission variants, the impact is minimal, since that can deal out both appropriate and inappropriate cards. However, if you're doing a campaign-long reading, that makes taking this a much larger strategic decision, since you're usually removing 8 cards from the pool. I didn't mention these in the list since they're still variants, so it's hard to say how often they will be used. — Ruduen · 623 6/29/21