Fast. Play after you defeat an enemy. 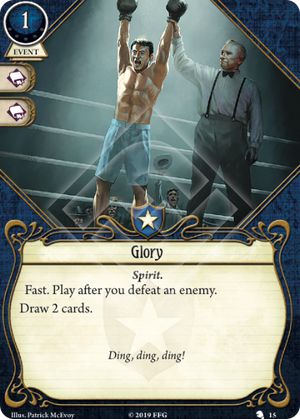 It’s unfortunate that much of Nathan’s deck is too niche to be used in anyone other than Nathan. Glory is the shining exception to that rule. Guardians have been absolutely starved of any card draw whatsoever- Seekers have tons, Rogues get it on oversuccess, Mystics have Arcane Initiate, and Survivors get it on failure. While Glory wont be enough to carry the class on its own, it’s a good step in the right direction. I personally see myself taking this in basically anyone that can take it and can reasonably kill enemies. Tony Morgan in particular now has a strong reason to choose Guardian as his subclass, where previously Survivor seemed to be the significantly better choice in terms of economy.

StyxTBeuford · 12523
I agree. This is going to be in a lot of Guardian decks now. Tony Morgan seems like an interesting choice to mention though since he has LCC or my new favorite (because it is usable) Decorated Skull with Haste (fight, fight --> actionless collect resource/card with Haste). This is another Guardian card that combos with Crystallizer of Dreams with double INT icons though. — TWWaterfalls · 775 3/30/21
Am i missing something? Aren't you essentially just turning a single resource into a single card? You draw two cards, one to replace this card and another net new card... but this costs 1 resource which is the standard "cost" associated with drawing a card. — Tetlow · 1 7/15/21
@Tetlow you are right, but it is important to note 2 things: 1) Guardian card pools are terribly lacking drawing options when not built-in like Mark. This card is one of the only option that helps to go through your deck to dig your key assets. 2) Guardians are more than others relying on few assets to do their job, weapons for example. And they also often run out of Ammo, needing even more draw. That's why Prepared for the worst is a staple. This card here is thinning your deck, making it more likely for you to draw your key assets earlier in the scenario. Other universal deck thinning cards are for example Tempt Fate that costs nothing, uses one card and draws one. Glory is here simply better in case you are desperately trying to add some draw. — Valentin1331 · 1836 7/16/21