If this skill test is successful during an attack, that attack deals +1 damage.

With a sickening smack, he struck the abomination over and over... until at last, it stopped moving.
JB Casacop
Nathaniel Cho #19. 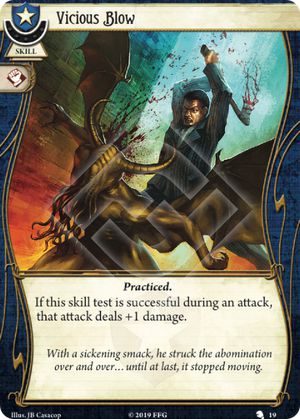 Just here to say that I find the duplicate cards in the investigator packs rather nice, for multiplayer deckbuilding with a single physical collection. Most of these cards are considered essential for their class and you almost never want to go without two copies. Vicious Blow especially is one that you always want if you plan on doing combat, but if your friend is building a main fighter then you're stuck with either sharing and thereby making her deck weaker, going without, or buying a couple more core sets (at which point you'd be better off proxying, which I personally try to avoid). In the past my group has always just tried to pick investigators whose card pools don't overlap so nobody has to share or make suboptimal compromises. I still think that can be a fun limitation, but it's nice to have a bit more freedom through these extras.