Fast. Play when an investigator at your location draws an encounter card or a weakness.

Cancel all of that card's effects and shuffle it back into its deck. (Do not draw a new card to replace it.) 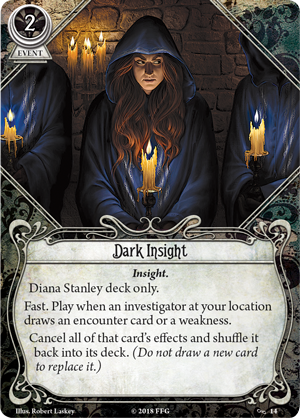 I'm honestly just curious: does this card also cancel enemies? I've had fantastic success with it just cancelling weaknesses and treacheries, but I'm not sure how far its utility goes. Anyone out there know? I suspect it does since it otherwise has wording very similar to Ward of Protection (5)

Malgox · 18
I would presume that it does. It doesn't say Treachery, it says Encounter Card. I feel that wording is significant. So unless the card drawn by another investigator has Peril, I think Dark Insight can cancel it! — cb42 · 29 3/5/19
I hadn't considered that unti now, but by the wording it seems like it does. Still, I do have my doubts, because that makes it effectively way better than Ward of Protection (5), since it can be played on other players and also cancel weaknesses, which makes it way too powerful, so considering all these, maybe the answer would be no??... I don't know... — matt88 · 2240 3/5/19
While, having a unique card be just about as good as a 5 XP card does seem more powerful than the designers would have intended, I can't come up with a textual reason why that wouldn't be the case. Though to be fair if Duke is probably *more* powerful than most 5XP cards... it's just that he's designed to bolster an otherwise weak investigator card. Dark Insight is just that kind of gas Diana needs to work — Malgox · 18 3/5/19
Huge difference between Ward of Protection (5) and this one: WoP discards the treachery card, while this one reshuffles it into the deck - so it will be drawn again at some time. — Iluvatar · 1 3/5/19
Yeah, agree with @Iluvatar, it doesn't discard the threat. It doesn't replace a player's lost draw to a weakness, either. In fact, in this scenario, it just means that down the road you'll have an additional lost draw (presuming you draw it again that same scenario). — cb42 · 29 3/6/19
If used on herself, her ability somewhat negates the disadvantage of losing a draw. With XP you can use Seal of the Elder Sign to recover this card, which lets you trigger her ability again when using this card. — Django · 3554 3/7/19
Woah, that's a great point, Django--and noted about the shuffle clause, @lluvatar — Malgox · 18 4/29/19
I've had some difficulty understanding the FAQ on shuffling a single card into an empty deck. If the last card in the encounter deck is an enemy and I play dark insight, what happens to the enemy? — Sycopath · 1 5/3/20
In AH, if you are instructed to shuffle a card into a deck that doesn’t (because it’s empty) it gets discarded instead. — PanicMoon · 2 6/22/20