Mythos
Agenda. Stage 2
Doom: 7. Clues: –
Hangman’s Hill is plunged into darkness as the spectral mist invades every inch of the woods and the chapel. Somewhere in the mist, the watcher spies its prey with eyes as empty as graves.

Locations cannot be flipped over. 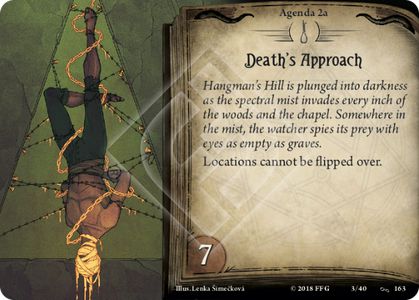 Agenda
Light fades as the anomaly closes in around you. Trees, graves, walls - all is enveloped by the otherworldly mist. Deep in the murk, worlds away and yet drawing ever closer, the cold light of the watcher's gaze radiates before you. It is time for your reckoning. 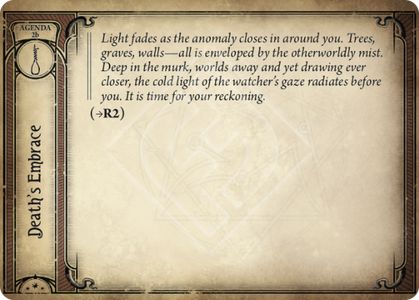 In my opinion, this scenario has a balancing issue. As I will try to describe, [The Wages of Sin](/card/05161) during Agenda 2 has a difficulty set on static numbers (4 heretics) who have a bit of a variable health, but that does not change their parley action or the unresolved business. Most often a scenario features a final boss with health or you have to gather clues or something else that is mostly dynamic based on the number of . Here though, the number of Heretics is 4 period.

In my experience, it is possible to get all 4 Heretics down with a highly specialized duo and a bit of luck, so I did it with [Rita Young](/card/05005) and [Ursula Downs](/card/04002) and 2 [Shortcut](/card/03232) on the VP Locations. With all the free moves of [Rita Young](/card/05005) and her combat strength on the one hand and [Ursula Downs](/card/04002)' free investigates on the other hand I was able to get all 4 Heretics but usually with investigators, 2 seems to be a good result. with 4 Investigators, you could reasonably hope for 3-4 while with one investigator you have a hard time to get just 1.

Now, having that said, this scenario is often compared to [Undimensioned and Unseen](/card/02236) which in my opinion is not completely true, since [Undimensioned and Unseen](/card/02236) provides the investigators with a map that makes it easier to move around and plan, the opponents come one by another and their health (which is tied to ) is the only obstacle, you have to defeat them and you are done, there is no Unfinished Business, so in my experience, it is manageable, even solo. Basically you have to have patience with [Undimensioned and Unseen](/card/02236) and wait for the best moment to strike and you actually have a good chunk of time. Now with [The Wages of Sin](/card/05161), this is not true, you have almost no time to gather the 3 Clues to even start the work to be done, and than very soon you will be plagued by [The Spectral Watcher](/card/05086), Haunting abilities, a very punishing spectral encounter deck, especially those enemies that die only of specific weapons and than on top of it all, you are dealing with the Heretic's effects once they are defeated (their Unfinished Business)- punishing you and also requires you to even fulfill others tasks that requires moving, clueing and sometimes fighting.

Also it should be considered, that the number of Heretics is fixed, so while playing with 4 Investigators, looking at the other side of the Heretic's cards is way more easy, especially since it always just costs 1 Clue. You get 4 Encounter Cards a round, that's true, but to fulfill the Heretics Unfinished Businesses you need to plan and intel provided by parleying helps a lot. Getting swarmed while an Unfinished Business is active while solo could possibly cost you the game. In a nutshell, with my experience, information I gathered by watching youtubers trying it and also expereinces shared by friends I cane to the conclusion that the more investigators you are having here, the more easy it gets. If you have specialized builds for this, at it becomes to easy (even though I doubt it) you can always play on hard difficulty but compensating difficulty with more players is not to my liking.

In my opinion this can and should be fixed by manipulating [Death's Approach](/card/05163), that's why I am writing the review here. This scenario is difficult though playable, if you do have enough time. 7 doom after [The Spectral Watcher](/card/05086) appears is way to low for smaller groups because of the many static parts of the scenario. So a suggestion, this card should have something like the following text added.

"this card gains an additional doom threshold of 8-2"

So, as solo player you have 13 turns, 2 players have 11 turns and so on. While most scenarios have there inherent difficulty dynamic (like deal damage, get clues etc.) with the number of investigators and a (mostly) static amount of time (i.e. doom), in this scenario the inherent difficulty is (mostly) static (i.e. number of Heretics in play) so the available amount of time should be dynamic (based on )

This isn't so much a review as another Luke question. If this card is in play along with Act 1a from this Scenario, can Luke ever escape from his Dream Gate (pointless reality)? Similarly if Detached from Reality is drawn while at Dream Gate (wonderous journey) while Agenda 2a+Act 1a is in play does it simply whiff?

(Sorry for not linking these cards, this is my first review and I have no idea how to do that on this website)

Sycopath · 1
As written I think cannot pretty clearly overrides flipping so while dream gate can enter play in either form and leave play in either form it cannot flip. This could mean you have to take the 2 horror on the chin, or that you get away with no effect from your weakness occasionally. — NarkasisBroon · 1 2/11/20
Another thing to consider is that the act and agenda have been erratad to say that "locations cannot be flipped over to their non spectral side". So the real answer to this question hinges on whether you think Dream Gate has "it's non spectral side". Clearly it has two non spectral sides, but it is unclear whether to be flipped to it's non spectral side requires it to have a spectral side. — NarkasisBroon · 1 2/11/20
Actually the act's errata says locations cannot be flipped to their spectral side. Dream gate definitely doesnt have a spectral side, so it isnt affected by the act at all. It may be affected by this agenda, see above — NarkasisBroon · 1 2/11/20
Yeah, "Luke breaks Arkham Horror"--Film at 11 :p I was also curious what people's opinions were on what in the heck the errata on Act 1a even does? Like the errata on Agenda 2a prevents a lock state if it advances before Act 1. However, I cannot discern what is gained by the errata on Act 1a. — Sycopath · 1 2/12/20