Spend 1 charge: Investigate. Investigate using instead of . You get +2 for this test. If you succeed, discover 1 additional clue at this location. For each token revealed during this investigation, you may discover 1 clue at a connecting location or place 1 charge on Eye of Chaos.

Alexandre Honoré
A Light in the Fog #227. 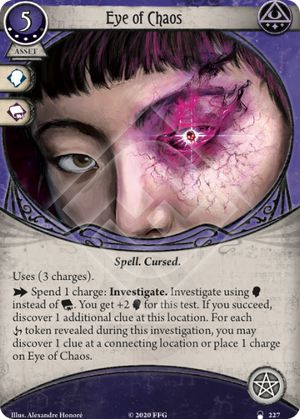 I thought I should just point out the differences from the L0 version because it took me more than one second to notice.

I haven't played with Curses enough to know whether this triggers twice enough to make it worthwhile, but it seems like it'd require a full bag of curses to get good value out of it. I think I'd generally be happier with the extra clue from Rite of Seeking or Clairvoyance, despite their downsides.

Lovetann · 3
The big difference is if you're able to keep generating curses and keep pulling them, then you can charge them up essentially infinitely. Probably less of an issue with someone like Akachi or Dexter, but still a very big consideration for a team that works with curses. — SSW · 168 4/15/21
Having done a Leo+Rex ALL the curses strategy I can say if you prepare for it you can totally just keep the bag full of curses and be basically fine. — Zerogrim · 241 4/15/21
The rub with blurse is that filling the bag with bless or curse is way easier than almost anyone anticipated. So yes, you can definitely stack curses on this thing, and what’s more, the failure or success of the test has no baring on the curse effects. So even if you fail, you could pull several curses and get tons of clues on adjacent locations. — StyxTBeuford · 12705 4/15/21
I am currently working through a 3p campaign with Gloria using Eye of Chaos (4) and Favor of the Moon for clue-finding. I think the +2 Willpower is excellent for helping handle the curse -2 modifier. — SocialPsientist · 133 4/17/21
1

How to use this properly...

1.) In the Thick of it with level 2 grotesque statue. 2.) Backpack. 3.) Finish the first scenario with at least 4 experience. You can upgrade both spells to max with only 4. 4.) Tides of Fate with a high bless generation partner. 5.) Set to intentionally fail an investigate using the totem and only draw curse tokens (also clearing curses from the bag while doing so). If you can throw take heart into this test, all the better! 6.) Charge this up to ridiculous levels (8+ uses) and now you have a rite of seeking on tap with no downsides. Very powerful combo with only minimal experience and setup.

drjones87 · 61
I'm VERY confused: which totem ? Why do you want to fail ? How can you be sure to only draw cursed tokens ? It looks like a lot of work when you can simply use Twila Katherine Price, Recharge, Winds of power, Enraptured, Eldritch sophist, ... to get more charges. — AlexP · 198 2/17/22
Is is possible to reveal lots of curse tokens during single investigation even with statue? Although we find curse with 3 times of statue, the expected number of curse tokens is less than 2 with 10 curse in bag. — elkeinkrad · 311 2/18/22