Archive of Conduits
Gateway to Aldebaran

: Move 1 leyline from this asset to a non-Elite enemy.

: Choose an investigator engaged with an enemy with a leyline. That investigator disengages from that enemy and moves to a connecting location. You may remove the leyline to automatically evade that enemy. This action does not provoke attacks of opportunity. 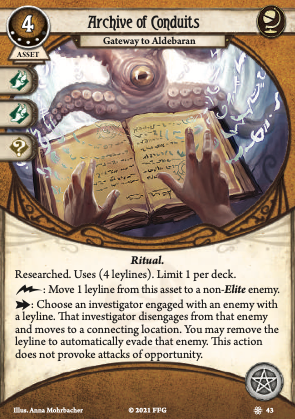 Every time this ritual comes into play, you have the chance to displace four non-elite enemies. You’re not exactly defeating the foes, which is good because in Edge of the Earth: some enemies punish you for defeating them. And it only works temporarily on hunters.

It also allows people to move from locations outside of their turns, which is again an EOTE benefit. (There are scenarios in Innsmouth where this could be useful, where you need someone to get to a location or onto a vehicle and they are elsewhere fighting off a monster.)

This is situationally useful, especially in campaigns with huge HP enemies or Vengeance foes. It’s probably not the best of the leyline books, but there is a use for it and that’s what a card should do: give you ideas to build around specific instances.

It disengage/evade only an enemy with a leyline, so when engaged with multiple enemies, this allows thinning down the fight for your fighters. (Unlike something like Elusive, which disengage with all enemies, so they are still clumped up together.)

Often the fighter is fighting a high damage enemy without knowing if more enemy would join in mid-fight on the next Mythos draw or not. By putting leyline on that high damage enemy, you can have a way to mitigate that situation.

If the fighter did draw a new enemy while fighting, activate to tear away harder enemy and left the fighter with easier enemy engaged and moved together to the fighter's new location. The fighter finish that enemy and is now free to walk away one more location such that the strong Hunter enemy cannot just follow and preemptively attack.

The next turn when it closes in, fighter moves in and resume the fight. Since leyline is not removed when you choose disengage option, you can repeat again later. Ensuring more 1-on-1 fights.

When playing 3 players, it is also cool to have the other person go in and grab the left-behind enemy, also save Engage action that would otherwise needed to go in and directly take it from the fighter that is now swarmed.