Forced - When Cherished Keepsake is defeated by horror: Exile it.

Mr. Pawterson always told Wendy things would turn out okay. But then again, Mr. Pawterson was a teddy bear, and he didn't know any better.
Robert Laskey
Stella Clark #20. 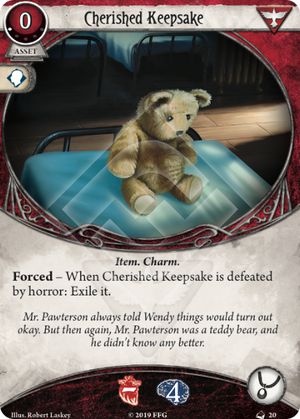 Elder Sign Amulet at a savings of 2 XP and 2 Resources but that also Exiles? Definitely more to consider than the average bear. A 1-point Exile isn't so bad, and you can play over Mr. Pawterson when he hits 3 Horror. Déjà Vu will get it back for you, but that's an extra 5 XP, making it more-or-less break even with Elder Sign Amulet, but, if you are investing in Déjà Vu, it's likely that you are going Exile-heavy, so it's less of a burden. Does anyone outside of Survivor want this? It would be a nice resource-generator for Tommy Muldoon, although the XP cost will add up. Anyone who can take 1 XP Survivor cards might like it for a one-shot, but I think this card and its sibling, Leather Coat (2), will mostly find its home in Survivor with a lot of Exile.

LivefromBenefitSt · 626
It's not totally clear, but I don't believe Tommy gets any resources from Cherished Keepsake (1) being defeated. Forced effects trigger before Reaction triggers, so the Keepsake's ability will be completely resolved (and the card exiled) before Tommy's ability can trigger. It will technically be in the same timing window, so he could trigger his, but the card would have been removed from play and thus had all tokens and attachments removed. If he even could still resolve his ability, it would give him 0 resources. — Death by Chocolate · 742 8/28/20
Ah, well, even more reason to limit it to a particular Survivor build. Thanks for clarifying that! — LivefromBenefitSt · 626 8/28/20
This is a really weird one, definitely not an obvious straight upgrade or anything. For some investigators, having 4 horror soak for no resource cost is worth the potential exile- Agnes for example might welcome it, as might Silas or Rita. However, Keepsake seems to work best in Tommy Muldoon and William Yorick, both of whom can replay it over and over again for much more horror soak long term than what this provides. I'm not fully certain who wants this. — StyxTBeuford · 12436 8/28/20
Yorick can still get great value if he gets the other into his discard or otherwise play them to break each other and prevent exiling. So they are functionally 1xp to increase their soak from 2 to 3, which can still add up to quite a lot! — Death by Chocolate · 742 8/29/20
What Chocolate's trying to say, this item is only exiled when it's defeated by horror, not when discarded. Like if you play another relic slot item (like the second version of this) or some crypt chill. — Django · 3498 9/2/20