Forced - After Deep One Bull engages you: Choose and discard 1 card from your hand.

Forced - After an investigator defeats another Deep One enemy at any location: Ready Deep One Bull and move it once toward that investigator's location.

Stephen Somers
The Innsmouth Conspiracy #88. Creatures of the Deep #1. 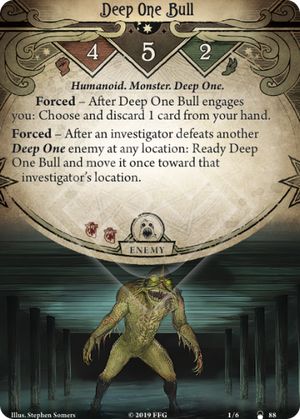 So apparently the running theme with Innsmouth's enemies, specifically those with the Deep One trait, is that they do bad stuff when they engage with you. This is not very nice, especially for those of us who enjoy using evasion as a reliable countermeasure. This one compounds that problem by making him creep towards you if there are any Deep Ones you do need to kill. Discarding cards is bad because cards win games, and while it is by choice instead of randomly (thank goodness), this guy will still hit you for a solid 2 damage while you do try to fight him, unless you have the capability to take him out in one round- which is not at all guaranteed, especially in the early scenarios he shows up in. 4 fight is rough. 5 health is a lot- even a full round of attacks with most level 0 weapons, assuming you land every hit, will only just be enough to kill him. And, to top all of that off, this thing DOESN'T HAVE VICTORY. There's only one of him in his set of I believe 6 cards, but still! Having to face this guy more than once is just bad times.

All of that is to say, William Yorick is the perfect countermeasure to Deep One Bull, because of two major reasons. A. Yorick can fight and tank really well. His recursion also makes him hurt less from the discard by engagement (take "Let me handle this!" to make sure it goes to him). But even better than that is B, which stands for Bury Them Deep. Yes, for some reason, Deep One Bull is non-Elite. And sure, that means there's other really strong countermeasures here for the more evade savvy among us. You have Waylay, and Slip Away, and what have you. But honestly? I would just bury this guy as deep as you can.