Wizard of the Order

Forced - At the end of the mythos phase: Place 1 doom on Wizard of the Order. 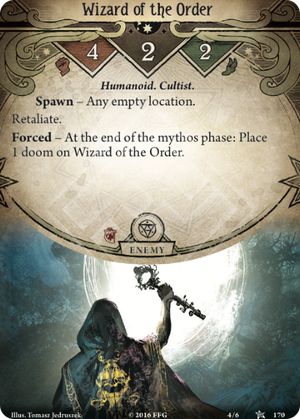 Man this guy is a huge jerk. As leader and teacher to all of the little Acolytes he has the same effect they do, but worse.

First of all, he spawns somewhere empty which usually means 'at least one action away from you' and he immediately gains a doom at the end of the mythos phase he spawns in. So far he's just as bad as his little minions. But as extra rank gravy he also has the following:

The first two additions make him a difficult kill for non-fighting investigators who aren't packing plans or solutions, but the last effect almost certainly mandates that he is a priority target regardless of whether anyone around is good at fighting.

10/10 on theme and drama though. While I hate seeing him show up, he is a flashy and intimidating villain who presents a threat that is a bit more than just a sturdy body and damage. It makes for great stories (and losses)

Final note: it is especially important that you not misunderstand the grim rule with this guy. While you may have multiple options of where to put him, he doesn't have to go as far away from you as possible. The rules explicitly state that when spawning an enemy if there are multiple valid locations it is player choice on where he goes.

Difrakt · 1146
Definitely don't make the mistake of waiting until you have something out that will soak the 2 horror that you have to take in order to enter the location this guy revealed in Shattered Aeons. — Zinjanthropus · 209 5/29/20