Stephen Somers
Heart of the Elders #195. 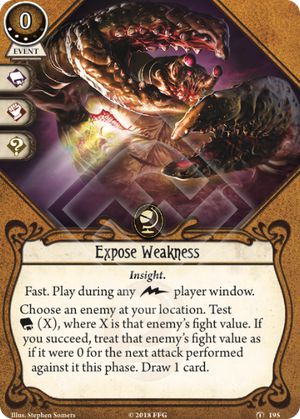 So I've only theory-crafted this and have no practical play experience, but...

This seems quite good in a 'four-action' Joe Diamond build that makes sure every card in its hunch deck is fast and can be played for free (or close to it).

He's a seeker that can play it that also has the capability to fight enemies. He can pass the book test for the most part. The free cantrip is great for refilling your 'real' hand and you still can use it for its intended purpose of setting up a huge blowout for an allied investigator before moving on to find clues.

Admittedly, the flaw in this plan is of course 'if you could already pass the book test as a 4, 4 character, why wouldn't you just fight to begin with?'

It is entirely possible that Joe as a Seeker 5/Guardian 2 has better/quantity access to icons, meaning that it is easier to pass the test than the test. In addition, passing the book test means that you have to commit 0 skill icons to the test, as you'll always succeed barring the token. And, minor note, it is possible that fellow investigators have better access to icons to help commit to the test, rather than , but that's just conjecture on my end.

Anyways, interested to hear what other people think about this very niche, very janky, and XP intensive inclusion in Joe.

DanPyre · 46
I think the difficulty with Expose Weakness as a hunch is that it's so unreliable. In fact, in some ways, making it a hunch makes it *more* unreliable because hunches go away if you don't use them that turn.You've got to have a relevant enemy on the turn you draw it from the hunch deck. You've got to actually pass the intellect test, which isn't a given, and might need you to invest into the test and then you still aren't guaranteed the damage- the difficulty 0 fight test can still automatically fail then. That's three potential points of failure - not drawing the card at a moment when it could help, failing the intellect test and failing the combat test - for an effect that in Joe boils down to attacking with intellect instead of combat. And that's leaving aside the opportunity costs of investing intellect icons etc into a test that isn't investigation and of slotting this card instead of a more versatile hunch ,like, say Preposterous sketches or No Stone Unturned. I think there's so many better ways to spend the xp and deck-slot, even in Joe. 3 xp will get you most of the way to Cryptic Research , Pendant of the Queen and lvl 5 No Stone Unturned. 2 xp will get lvl 2 Seeking Answers, or lvl 2 Mind Over Matter/I've Got A Plan if you really want a fight-with-intellect card. And that's leaving aside the many many other phenomenal Seeker xp cards. By contrast, Expose Weakness seems like such a waste... — bee123 · 24 12/8/20
5

It feels like the 3XP cost of upgraded Expose Weakness has more to do with making sure that Roland Banks can't buy it than it does with the actual value of the card itself.

This card basically lets a Seeker fight an enemy with their Intellect. If that were all it did, then it would just be a weaker version of Mind over Matter.

The card's only two saving graces are the card-draw (which is fine, I guess), and that it lets another investigator take the shot. The clearest combo is Shotgun, for which Expose Weakness hugely boosts the odds of scoring the maximum 5 damage. If you throw Double or Nothing in the mix, you could be looking at 10.

That combo is all well and good if you can pull it off, but it comprises three cards across separate classes and, realistically, at least two separate investigators in the right place, and a total of 7XP. That's assuming your scenario even has an enemy with enough health to make it worthwhile.

If that represents the best case for Expose Weakness, then it's in trouble. For the same 7XP, you'd be far better off getting Acidic Ichor and 3XP Emergency Cache to refill it, and dealing with the enemies yourself. As a Seeker, you're also in a much better position to make sure you actually draw those cards, using e.g. Cryptic Research or No Stone Unturned.

Also compare with "I've got a plan!" - the other major card built around weaponizing your intellect. It's more costly than Expose Weakness and doesn't work if you don't have the clues (although for a Seeker that shouldn't be a problem very often), but it deals solid damage and you don't need anybody else's help to deal it. It's genuinely unclear whether Expose Weakness even represents an improvement, which has got to be a pretty embarrassing comparison for the card that costs 3XP.

I give this card a rating of "unpurchasable."

sfarmstrong · 255
This does seem like an extremely weak use of 3 XP. — CaiusDrewart · 2687 9/11/18
The biggest saving grace of this card is that it sets the fight to 0, which nearly guarantees success. Put this in a rex deck and combo it with double or nothing, and you stand to enable your guardian to make one very effective attack. Rex is efficient enough that he might even have time for this. — SGPrometheus · 636 9/13/18
Also combos with Monster Killer really well, but that's still an 8xp investment (divided between two people, but still). — SGPrometheus · 636 9/13/18
@SGPrometheus, I feel like I addressed those points in the review itself. The plays you're describing certainly work, but they're inefficient compared to the abovementioned alternatives. You could absolutely justify playing Expose Weakness if you drew it, but I don't see how you would justify including it in your deck to begin with. That's also how I feel about Double or Nothing - the mere fact that useful applications for the card EXIST isn't enough to overcome its dismal average value. — sfarmstrong · 255 9/13/18
Speaking of combos, Monster Slayer is also an ideal target for this card, since a lot of tough enemies are not actually elite. — Azriel · 1 1/6/19
This feels like it's only passable on expert, where higher education boosted book tests and testless damage are about the only things you can rely on — Mataza · 17 6/15/20
1

If this card lasted until the end of that investigators turn, maybe it would see play in multiplayer if your friend is prepared to blast things with his shotgun (which also doesn't see much play), but sadly it is unplayable in this current form.

Blood&gore · 84
I'm confused. It lasts the phase, do you just wish it lasted for more than one attack? — SSW · 168 5/1/22
Yeah i meant for all attacks during that investigator turn and not just 1 attack this phase — Blood&gore · 84 5/1/22
That would make it very powerful for a card that doesn't ask much from you -- 3 XP, but not resources and not even an action. If it worked the way you suggest, it would help kill most end-of-scenario bosses in one turn, which is a lot of 3 XP. With a fight of 0, every token hits except the Auto-fail. — LivefromBenefitSt · 887 5/1/22
I dont think this card is as useless as it seems. It has written all over it "use me in multyplayer, for that critical attack that needs to land". — LordWolfen · 1 5/2/22
It's not useless, but probably 95% of the time, it works the same as if you'd had Overpower and committed it to the other investigator's attack. There just aren't that many high-damage attacks that don't also come with a high skill value. — Hylianpuffball · 20 5/2/22
True, i guess it depends if you play taboo or not. Since the broken part comes on letyi g ypur guardian know to go with double or nothing shotgun blast. (2x0 is still 0 afterall) — LordWolfen · 1 5/2/22