Place 1 of your clues on the location with the highest shroud. Remove Unsolved Case from the game.

Forced - If Unsolved Case would be shuffled into your hunch deck: Add it to your threat area instead. For the remainder of the game, it gains: "Forced - When the game ends: Joe Diamond earns 2 fewer experience for this scenario." 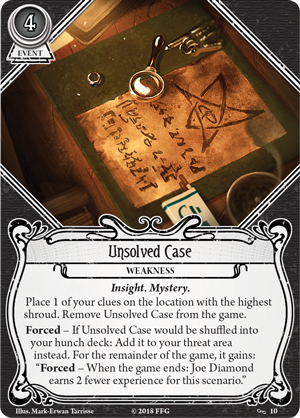 Note that you are allowed to play this card even if you do not have a clue. The ability on this card has two separate effects, and they are not linked by a "then," so both occur if possible irrespective of the other. Separately (but just as importantly), this card when played will always change the board state because the card will always be remove from the game.

H/t to AK45526 on the reddit board for pointing this out.

A relatively simple but damaging signature . Looking at the two elements, the effect and the discard condition, we get:

The effect: The sharp needle in Joe's Insight haystack, this is going to cost you an action, 2 resources, and maybe a clue. Note that you can play it even if you don't have a clue, which makes it considerably less damaging. Joe needs to keep 2 resources on hand until this gets drawn, and it could cause an AoO if he is engaged when it comes up, but, despite the nasty effect if it fires, this is not a terrible threat. There is no particular mitigation, beyond making sure you have those resources or a quick way to get them. If Joe has somehow managed to translate the Cryptic Grimoire, he can play this fast. That Tome would generally help Joe, even if it's not hugely feasible for him to translate it without a cooperative Rogue or a lucky draw of the Dread Curse Weakness during deck building. Farsight could also help, but it's got a high opportunity cost for Joe. Other than that, there aren't a lot of card interactions. You can't even troll your party by playing Eidetic Memory, since Unsolved Case is removed from the game.

The discard condition: Another "one and done" Weakness, and one that removes itself from the game after playing, so it won't recur, even if Joe decks himself.

Summing up the facts, this is a way below average signature Weakness, in competition to be the easiest in the game.