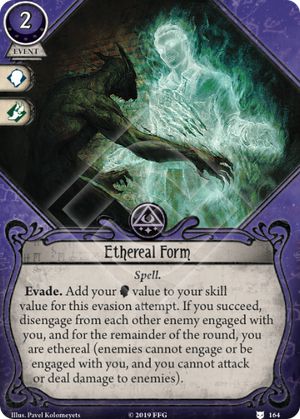 I foresee Ethereal Form (and it's counterpart Read the Signs) becoming a staple among mystics, mostly due to innate attributes. All classes have an best stat, but there are also rather well-defined second-best stats and worst stats, as tabled below, calculated through averages of investigators' attributes within each class:

Mystic's in particular is quite special due to every mystic except one having exactly 3 in that stat. Combined with no below 4 (expect Diana, but only technically), means that Ethereal Form will be testing at 7 minimum in all but Jim's hand (same for Read the Signs in all but Agnes's and Akachi's hand). It is also a spell, meaning the staple (and only, until Scroll of Prophecies came out) lvl0 mystic card draw Arcane Initiate will readily draw it.

Ethereal Form is of interest to Agnes Baker thanks to Heirloom of Hyperborea, of particularly interest to Marie Lambeau, thank to her innate ability, and of ESPECIALLY particular interest to Sefina Rousseau, thanks to her entire event-heavy play-style and whopping 8 test base for the card. Other non-mystics who can take mystic card and test Ethereal Form at 6 or above by default include Patrice Hathaway, Mandy Thompson, Lola Hayes, and, strangely enough, every Dunwich Legacy character.

That's all before we even get to what it does. It's closest comparison would be lvl0 Survival Instinct: same evade one, disengage all effect, and similar prevent re-engagement effect. It even has the same downside of possible screwing over fellow investigators at your location. The main difference is a 2 cost difference, a boost of 3 (on average) instead of 1 to the skill test, and the persistent, double-edged sword effect until round end. Your mileage may vary on the usefulness of a Survival Instinctesque card, but it's consistency is unquestionable; testing at 7 makes its effect a likely prospect, even on hard difficulty.

Lucaxiom · 3388
I think my take is a bit more negative, overall. I kinda it suffers ( as does Survival Instinct and On the Lam , which is another good comparison) from the fact that evasion is generally less good than fighting so you really need to build around evasion to make evasion cards worthwhile or the cards need to be spectacular. I'd say for most of the investigators you mention, they'd rather fight. And even so I'd say this card has two really big disadvantages relative to On the Lam and Survival Instinct. One is that it's an asset so you have to pay its costs before you know you're going to need it, and the other is that clause about not being to deal damage until the end of the round. I think you're underestimating that. Once you're ethereal, it locks you into being ethereal to deal with enemies pretty much indefinitely and in some scenarios (e.g Undimensioned and Unseen) you flatly need the ability to deal damage to get anywhere. So it's a very action-intensive evasion-based way of dealing with enemies in a class that usually has decent combat options, with a hefty downside that needs to be carefully managed and that sounds like a fairly iffy card to me. — bee123 · 24 1/9/20
I disagree so heavily with bee. Ethereal Form is an amazing tempo play when you simply need to get from A to B. It’s not as good as Elusive most of the time, but it does double as an evade on one enemy. Think of any scenario where you meed to get to the exit through a pile of enemies- Ethereal Form can save you whole turns of actions in one card. Read the Signs is still probably better because 2 clues is more generally useful, but I dont see myself ignoring Ethereal Form in most Mystics from now on. — StyxTBeuford · 12722 1/9/20
Interesting! I'm glad to be disagreed with :) . I agree that escaping does seem like the best circumstances for it, but I'd guess I'd ask how many scenarios are like that? SPOILERS, The Doom of Etzli and the Unspeakable Oath seem like the big ones , (and 1000 shapes of horror, to an extent) but that's not many. And I'd say there are a lot of circumstances where not being able to remove an enemy from the table hurts. Not just stuff like U and U and The Wages of Sin, but enemies with doom , enemies that attack without engaging, the Echoes of the Past guys... It seems to me like a lot of agency you're giving up in exchange for a slower riskier Elusive, especially when, say Sefina or Mandy could just take elusive with those situations in mind anyway. So, it's not the utility I doubt, it's whether the utility's worth the downsides - especially when other cards can do similar things without those downsides. Maybe I should try it out, and see if it feels that scary in practice :) — bee123 · 24 1/9/20
Sure, but a lot of that feels more like a criticism of evading over fighting to begin with. Why do we ever evade in the first place? Because in some cases it is a better option than fighting. TCU and TFA in particular reward evasion a lot. Ethereal Form is crazy because it's not just an evade on one enemy, it's you being able to completely ignore enemies for a round. Certainly this has more consistently good utility in solo where saving your charges for a Big Bad or being able to get yourself out of a situation where you're engaged with too many enemies to reliably beat them all matters, but if you have Ethereal Form in multiplayer you can just straight up play more risky. You can let enemies come to you, live on the brink of death, then escape at the last minute, which is exactly what our Jim did in Wages of Sin and it netted us another Heretic. I think this card is crazy good. — StyxTBeuford · 12722 1/9/20
Also the fact that it's a spell isn't irrelevant. It's another target for Arcane Initiate, so it's fine even as a one of. — StyxTBeuford · 12722 1/9/20
Its better than blinding light in TFA cause it doesn’t kill those 1 hp vengeance vipers — Django · 4246 1/10/20
It's an event, not an asset. You don't pay the cost until you use it. And you're only ethereal for the round. I don't understand how that locks you into being ethereal indefinitely? You have only two copies of this, unless you're copying it with Sefina's signature or using Dayana Esperence to play it repeatedly. — Yenreb · 15 1/15/20
Spirita Athame is very nice for this and Read the Signs and Spectral Razor. — DocLeo · 609 4/13/20
Super useful in TIC. — MrGoldbee · 1265 4/1/21